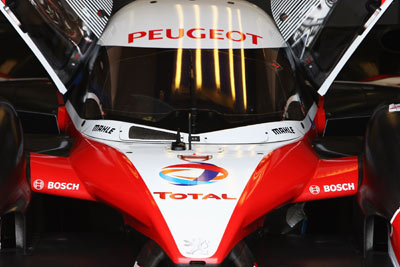 ­Getty Images
The Peugeot 908 HDi FAP at the Le Mans 24 Hour race in France. Admit it. You want to be behind the wheel.

Many of the world's automakers use racing as a way to develop technologies that often find their way into production cars. For instance, Chevrolet races the factory C6.R Corvettes in the American Le Mans Series, along with Audi and its R10 TDI (successor to the legendary R8 TDI). In both cases, the manufacturers leveraged the success of their racing programs by offering gear heads with deep enough pockets the opportunity to buy the street version (C6 Corvette ZR-1 and Audi R8) of their beloved race cars. The practice has been going on for years.

Automakers often have an in-house sport tuning division filled with engineers who painstakingly research and develop their race cars like AMG at Mercedes-Benz or Motorsports at BMW. Peugeot Sport takes care of that for the French automaker. When deciding to build the 908 RC, Peugeot looked no farther than the in-house technologies developed for the 908 HDi FAP race car, which currently competes in the American Le Mans Series.

On June 14, 2005, Peug­eot announced its intentions to return to sports car racing’s highest level, the Le Mans 24 Hours. From 2000 to 2006, Audi won five out of six races at Le Mans. After an absence of more than a decade, Peugeot hoped the 908 would be the answer to Audi’s stranglehold on sports car racing. A Le Mans Prototype (LMP1) entry, the 908 debuted in Monza, Italy, in 2007 where it collected the victory in the 1,000-kilometer (621-mile) Le Mans Series race and backed up its success with another win its next time out at Valencia, Spain.

During testing, the 908 set a new record at Le Mans (Circuit de la Sarthe), with a time of 3 minutes and 26.707 seconds, besting the previous mark of 3 minutes and 29.905 seconds by the Audi R8 in 2002. In its first attempt at Le Mans, the 908 fared well, posting a runner-up finish. In 2008, the 908s out qualified the Audis and set a blistering track record, with a lap of 3 minutes and 18.513 seconds, beating their own previous mark by an unheard of 7.8 seconds. After leading for much of the race, one of the R10s snatched the lead away after rain hit the track, relegating both Team Peugeot 908s to a second- and third-place finish, respectively.

The 908 HDi FAP uses a diesel-powered 100-degree V-12 engine that produces 700 horsepower. You might think of a diesel engine and picture a bus spewing black smoke out its exhaust pipe in downtown traffic. With the HDi DPFS engine, that's not the case. The 908's engine has two diesel particulate filters, one on each exhaust system, so the e­ngine burns smoke free.

More impressive is the power. A popular misconception with diesel engines is they produce lots of torque but not as much horsepower. To an extent, that's true, as you can see in the table above. But the relatively small bore and long stroke of the HDi DPFS engine, as well as the flatter stroke angle, produces plenty of high-revving horsepower, and the six-speed sequential gearbox matches the power band just right, to the tune of speeds in excess of 230 mph (360 kph).

Now that you've learned that the Peugeot 908 HDi FAP is one fast car, flip to the next section to see how that racing technology fits into the 908 RC concept car.