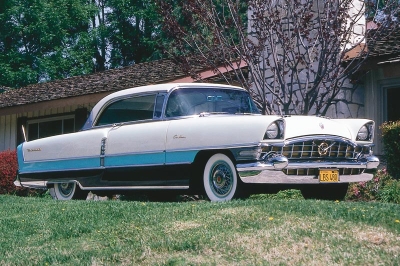 The 1956 Packard Caribbean was part of James Nance's plan to revitalize Packard's line of passenger cars.

James Nance blew in like a tornado, aggressively seeking new military business while declaring that the firm's continued emphasis on medium-price cars was "bleeding the Packard name white."

Accordingly, he made the 200/250 into new Packard Clipper models for 1953, stage-one of his plan to divorce the cheaper cars from the rest of the line in both fact and name. Packard, he decreed, would henceforth build nothing but luxury cars, including the long-wheelbase formal sedans and limousines it had lately neglected.

Lack of time and money precluded a line-wide makeover for '53, but Nance did see to the inclusion of an eight-place Executive Sedan and "Corporation Limousine" on a massive 149-inch chassis, priced around $7000. He also contracted with the Derham Body Company for a few formal Patricians with leather-covered tops, tiny rear windows, and $6531 price tags.

Also for the top of the 1953 line, Nance pushed out the Caribbean, a glamorous convertible on the short wheelbase with colorful styling by Richard A. Teague. Inspired by Richard Arbib's 1952 Packard Pan American show car (built by Henney), the Caribbean carried a 180-bhp 327, rakish circular rear-wheel cutouts, jaunty "Continental kit" outside spare tire, and chrome wire wheels, plus most every optional amenity in the book. It cost a lofty $5210 and was deliberately limited to 750 copies -- for snob appeal -- but the Caribbean was as well-received as Cadillac's new '53 Eldorado.

Anchoring the '53 line were Nance's Clippers: two- and four-door sedans in standard and DeLuxe guise powered by unchanged 288 and 327 engines. Included in the standard group was a snazzy hardtop-styled pillared two-door called Sportster, attractively priced at $2805. The 250-series was defunct, but the Mayfair and standard ­convertible returned; the cheapest long-wheelbase '53 was a sedan called Cavalier, replacing the 300.

Nance had hoped for all-new '54 Packards, but time and money were again lacking, so a look-alike interim series was fielded with rimmed headlamps and integrated backup lights the only visible differences. The 327 engine was enlarged to 359 cid and 212 bhp for Patrician, Caribbean and standard convertibles, commercial chassis, and a hardtop named Pacific. Air conditioning now returned for the first time since the war.

But 1954 was a terrible year, with production of only 31,000 cars. Of these, some 23,000 were Clippers: Specials and DeLuxes as before, plus new Super sedans and a Super Panama hardtop coupe. Specials again used the 288 engine, but the DeLuxe's 327 was bumped up five bhp; the latter also powered Supers. The Cavalier sedan used a 185-bhp version. Chassis production came to 335.

The revolutionary new model Nance wanted for '54 was postponed to '55 partly by the so-called Studebaker-Packard merger, which was actually a Packard buyout. What Nance didn't know when he signed the papers was that Studebaker had huge productivity problems in its high-overhead South Bend, Indiana plant, with a break-even point somewhere over 250,000 cars.

Contrary to many accounts, Packard was still a fairly healthy company at this point, but Studebaker was sinking and would eventually drag Packard down with it.