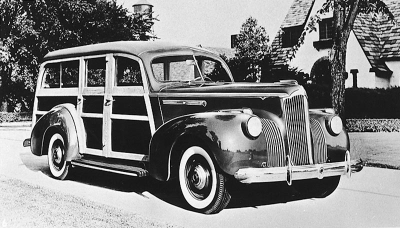 The wood paneling on the1941 One Twenty station wagon was distinctive, but 1941 models were not significantly different from their predecessors.

The Darrins were naturally Packard's priciest 1940s -- $3819 for the One Twenty victoria, $6332 for the Custom Super convertible sedan -- so sales were naturally minuscule. Then, too, planned production (at the old Auburn plant in Connersville, Indiana) was deliberately limited. Only 50 victorias were built for 1940 and a mere 12 convertible sedans (of which nine survive today).

The Sport Sedan was announced as "virtually a request car -- built for those who look to Packard to...create the newest, the finest, the most luxurious in motorcar transportation." But it never got going, and was dropped after only two were completed at Dutch's shop.

Packard itself built two "Darrinized" sedans with stock 1940 front ends, but they weren't nearly as pretty and led nowhere productwise. As you might expect, all Darrin-Packards have long been deemed "Classics" by the Classic Car Club of America (CCCA).

Also offered for 1940 were an all-weather cabriolet and town car by Rollston, priced at $4473 and $4599, respectively. Only a handful were built. But even some regular models were quite scarce. Of the 98,000 Packards built for 1940, only 5662 were Super Eights and just 1900 were Customs. The rest were One Tens and One Twentys.

Packard finally rebodied its entire line for 1941, though it wasn't blindingly obvious. The main visual clues were slightly larger windows and -- in a big styling innovation for Packard -- headlamps set firmly within the front fenders. Wheelbases were unchanged, but floors were lowered, suspension was suitably revised, motor mounts were enlarged, and engines benefited from steel-backed rod bearings and an oil-bath air cleaner.

These changes also applied to Darrins, but there was only one now: a Custom Super Eight One Eighty Victoria. This retained its general 1940 appearance save minor trim, a slightly different "notch" treatment, and the flush headlamps.

One other difference: Its production was transferred to Cincinnati, where ambulance/hearse builder Sayers and Scoville crafted 35 as '41 models and another 15 to little-changed 1942 specifications. Overdrive was still optional throughout the Packard line, but for 1941 it could team with a new $37.50 "Electromatic" clutch. This disengaged by manifold vacuum upon releasing the accelerator to permit "clutchless" driving in second gear, which covered most day-to-day use; the pedal could still be floored to select first.

But Packard saved its biggest '41 news for mid-season when it unveiled the Clipper, a four-door sedan priced at $1420, squarely between the One Twenty and One Sixty. Though built on the One Twenty chassis, it looked like no Packard before: smooth and modern -- a bold, unexpected bid for industry design leadership.

The Clipper bore the unmistakable Darrin touch but was ­actually a joint project with contributions from Packard's own stylists under Werner Gubitz, plus several stellar consultants. Still, it was mostly Darrin, seen in the descending beltline, tapered tail, and long prow-front with the slimmest Packard radiator yet. Predicting postwar styling at Packard and elsewhere was a nearly flush-sided "envelope" body with front fenders "swept-through" into the doors -- and width that exceeded height.

Still, this performance encouraged Packard to proceed with making "Clipper styling" virtually linewide for 1942. The sole exceptions were commercial vehicles, One Sixty/One Eighty convertible coupes, and custom bodies. The last again included the Rollston styles as well as new LeBaron-built long sedans and limousines and a beautifully formal Sport Brougham.

Like other makes, Packard's 1942 production was cut short by America's entry into World War II, the total ending just shy of 34,000, mostly Clipper-styled 110/120 and One Sixty/One Eighty models.