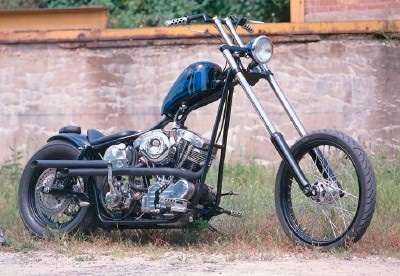 Arriving at the shop of Suicycles as a complete basket case, Oozn Evil gradually went together with catalog parts, pieces on hand, and a few custom-made components. After 12 long months, Oozn Evil was again ready to hit the streets.

The Harley-Davidson engine was treated to a number of aftermarket components, growing from its stock 74-cubic-inch displacement to 98 in the bargain. It also got a straight-pipe exhaust system custom-made by Suicycles. But the stock generator is used instead of a more modern alternator, the ignition remains the original point-and-condenser setup, and a kick starter still brings the engine to life.

Though the chassis incorporates a rear swingarm, solid struts replace the original shock absorbers, effectively making this a hardtail frame. A pair of Harley-Davidson Wide Glide front forks were extended 12 inches and hold a 21-inch spoke wheel with no brake. That leaves the braking chores to the large rear disc, which is attached to a 16-inch spoke wheel.

Like any bike that rolls out of Suicycle's shop, Oozn Evil is a study in low-tech componentry. But to many, that's only right and proper for an Old School design.

Go to the next page for more photos and details of this Harley-Davidson-powered chopper, the Oozn Evil.For more information on custom choppers and motorcycles, see: 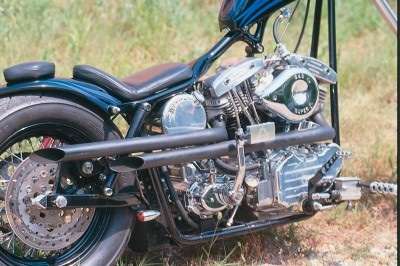 Harley-Davidson’s Shovelhead V-twin is an Old School staple. Note the solid strut that replaces the rear shock absorber, turning this into a hardtail frame.

The Oozn Evil is a custom motorcycle built by Suicycles. Below are more pictures and details of this powerful chopper.

What does stretching a sportbike do?
Can motorcycle jackets save your life?
Can doing a wheelie break your motorcycle's drive shaft?