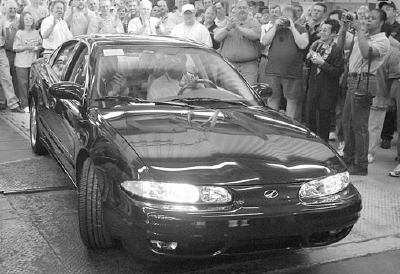 The last Oldsmobile car can now be seen at the museum in Lansing.

Oldsmobile wasn't the only GM unit in the red, but estimated losses of $120 million a year made it a prime target for cost-cutters. Thus, barely two weeks before Christmas 2000, GM announced plans to phase out the Oldsmobile line over the next several years. All future-model development was stopped (it already had been in some cases) and advertising and marketing were cut to the bone.

Needless to say, Olds dealers were stunned, then angry. So were many within Oldsmobile itself. As it happened, the death notice was issued during the press preview of a new and better 2002 Bravada sport utility, where the news took Olds designers, engineers, and marketers completely by surprise.

The following May, Olds supplied 90 or so of the new SUVs for service at the Indianapolis 500 -- including pace car duty, a first for a truck at the Brickyard. This was no sentimental gesture, however. Olds had signed on as a race-day sponsor some time before its termination was decided. AutoWeek reported that dealers were to offer regalia decals for Bravada owners who wished to dress their vehicles like the specially equipped pace truck, but the factory issued no Indy replica. There was no point.

Ironically, Olds car sales finally turned up for 2001, the first year-to-year increase since 1994. It wasn't a big gain -- less than five percent on a model-year basis -- but it did suggest a nascent turnaround. As Zarella told AutoWeek: "Our strategy [with Olds] was starting to work -- we ended up with a lot of positive demographics. The problem is, there just weren't enough of them." Public relations director Gus Buenz put it more succinctly: "We've got good product, but not enough people know about it."

At first, GM planned to keep building existing Olds models "until the end of their current life cycles or as long as they remain economically viable." By September 2001, however, the company announced "Oldsmobile production has remained unprofitable," and said the end would come with model-year 2004. Intrigue and the V-6 Aurora were killed off quickly, ending production in June 2002. The V-8 Aurora went to its grave in May 2003.

For 2004, Olds sold only Bravadas, Silhouette minivans, and Aleros. As a farewell gesture, the last 500 units of each model rolled out with special "Collector Edition" wheels, badges and interior trim. The very last Oldsmobile, a black Alero, came off the line on Thursday, April 29, 2004. It was immediately sent to the R.E. Olds Transportation Museum in Lansing, the city where the story had begun 106 years before. The one possible consolation for legions of Olds loyalists was that the Bravada was quickly reincarnated (with optional V-8 power) as the 2005 Buick Rainier.

The protracted phaseout gave General Motors plenty of time to settle with Olds dealers, many of whom suddenly found themselves without a business. By some estimates, GM spent over a billion dollars in buyouts and other dealer compensation between 2001 and 2006 -- proving, perhaps, that one must sometimes spend money to save money. But though killing Olds may have been a necessary, if painful, step, it was far from enough to cure what ailed GM -- as subsequent events would show.