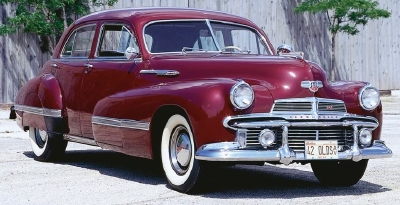 Oldsmobile's 98 sedan had a massive appearance and massive interior.

Replacing the 80 was a new 124-inch-wheelbase Series 90 that included Oldsmobile's first convertible sedan -- called "phaeton" per GM practice -- an odd latecomer, considering this body type was fast waning at other automakers.

At $1570, the Series 90 phaeton was the costliest 1940 Olds, and production was predictably limited: just 50 in all. Styling throughout the line was typical of GM that year, with wider grilles and front fenders, semi-integrated headlights, and, on the 90s, smoother tails and rear rooflines.

A more massive look arrived for 1941. Grillework was lower and wider, and headlights now firmly resided within even wider front fenders that blended more smoothly into the bodysides. Series doubled as Olds offered both six and straight-eight ­models in two trim levels spanning a narrower $852-$1575 price range.

The same body styles returned for '41, but most were now available with either engine. The sole exception was the phaeton convertible sedan, which came only as a Custom Cruiser 98.

Its production was again minuscule at only 119 for the model year, after which the division followed everyone else by dropping four-door convertibles. Fastback styling bowed in new Dynamic Cruiser four-door and club sedans. Four-door Custom Cruiser sedans again sported a handsome notchback profile with semi-closed rear-roof quarters.

In March, the 66/68 expanded by adding a four-door Town Sedan with styling like the Series 90 model. Despite record model-year production, Olds finished sixth in the annual industry race. Though the division had risen as high as fifth for '36, it would usually run sixth or seventh into the mid-'50s.

Olds slipped to seventh for war-shortened 1942, but enjoyed respectable volume of just under 68,000 units. Styling for that year's "B-44" line featured "Fuselage Fenders" -- elongated pontoon types faired into the front doors -- and a busy, two-tier "double-duty" grille bisected by a prominent horizontal bar. Longer rear fenders tapered beyond the deck, but remained bolt-on components. Engines stayed the same, but not models.

The six-cylinder 96 departed and the 98 was cut to convertible coupe, club sedan, and four-door sedan on a new 127-inch wheelbase. All series now offered "torpedo-style" club sedans, with plain and Deluxe versions for 76/78.

Most '42 offerings returned with no changes in wheelbase, engines, or body styles. An exception was the Series 68, which wasn't reinstated until 1947. Prices did change in a big way, thanks to postwar inflation. The cheapest '47 Olds, the 66 club coupe, sold for $1407, and the 98 convertible topped the line at more than $2000.

Styling was cleaned up via a four-bar grille shaped like a wide, upside-down U; a shield-type hood medallion rode above it. Front fender moldings were enlarged for '47. Hydra-Matic was increasingly popular, and Olds began producing more self-shift cars as a percentage of total volume than any other make.