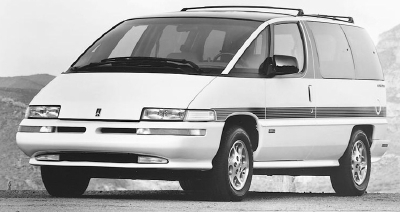 Oldsmobile produced quality vehicles such as this 1993 Oldsmobile Silhouette, that just didn't take off with the public.

Unfortunately, John D. Rock couldn't do much about existing Oldsmobile models and a couple of new ones in the pipeline. Thus, the Toronado and its Trofeo offshoot were left to languish through 1992, then dropped for lack of sales (a mere 6436 that last season).

Both finished out with the improved "3800" V-6 and electronic transmission controls adopted for '91, the year antilock brakes became standard for Toro as well Trofeo. It was a sad end for a car once so innovative and compelling.

Likewise, the big rear-wheel-drive Custom Cruiser vanished after 1992 and a two-year stand as a clone of Chevy's restyled '91 Caprice wagon. Just slightly more than 12,000 were made. Nineteen-ninety marked the last use of the 307 V-8 descended from the original '49 "Rocket." It was another sad ending for Olds, but the engine was simply no longer needed.

With GM down to a handful of rear-drive cars, economics dictated that all but the Cadillacs use Chevy power. And in fact, Chevy's 5.0-liter V-8 was made standard, and its 180-bhp 5.7-liter V-8 was added as a '92 Custom Cruiser option. Both were too late to help sales, but the bigger engine's bountiful torque and 10 extra bhp were appreciated in the weighty wagon.

The Ninety-Eight observed its 50th anniversary with a substantial 1991 makeover. Wheelbase was unchanged, but the new four-door styling was handsome in its chunky way. Both the Touring Sedan and new Regency Elite boasted ample interior space, all kinds of no-cost amenities, and a smooth new "3800" V-6 with 170 bhp.

The Eighty-Eight, also still front-wheel drive, got its own redesign for 1992. Coupes were gone, but Royale and uplevel Royale LS sedans wore attractive new styling to stand crisply apart from H-body cousins Buick LeSabre and Pontiac Bonne­ville. Here, too, was a "3800" V-6 and, for LS, newly optional traction control.

Arriving in spring was the suave LSS (Luxury Sport Sedan) option package with front bucket seats and a handling-oriented chassis with 16-inch wheels and performance tires. Overall sales were good: some 115,000 for the model year.

All Eighty-Eights got a bit more torque for '93, plus standard antilock brakes (formerly optional). The '94s sported minor cosmetic changes and a tidier dash with a passenger-side airbag to complement the already included driver-side restraint. For '95 came an improved "Series II" V-6 with 35 extra bhp, and the LSS was available with a 225-bhp supercharged "Series I."

Sales see-sawed despite the rising technical progress, falling to about 62,400 for '93, then swinging up past 82,000 before easing back to some 75,400. But this was still one of the most pleasant and practical of family cars, and the Eighty-Eight remained the third-most-popular Olds after Cutlasses Ciera and Supreme.

Once the country's best-selling car line, the Supreme wasn't even in the top 25 after 1989, a huge comedown for a mainstream midsize. There were two likely reasons: the increasingly negative image of the Olds name and wave after wave of new, highly appealing competitors.