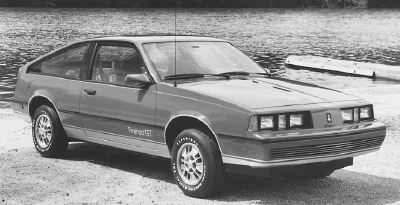 Oldsmobile did not have much success with the Firenza, shown here as a 1984 GT hatchback coupe.

Firenza fared even worse. Arriving in March 1982 to replace Starfire, Lansing's version of the front-drive 101.2-inch-wheelbase corporate J-body subcompact failed to attract more than about 45,000 customers in most years -- except for 1984, when it garnered a credit­able 82,500 -- even though Olds tried most everything it could think of to sell it.

By 1988 the Firenza had offered all the J body styles, sporty GT and SX variants, overhead-valve and overhead-cam fours, optional V-6, and a confusing procession of price-leader and luxury models. But nothing seemed to work, and Olds gave up after '88.

Firenza was no great loss, though, because 1985 brought a more-saleable small Olds in the N-body Calais, called Cutlass Calais after 1988. Sized between Firenza and Omega on a 103.4-inch wheelbase, it bowed as a rounded, short-deck coupe in two versions: base and -- just to confuse things -- Supreme. Four-door sedans were added for 1986.

There was a lot of J-car engineering under the "modern formal" styling, and initial engine choices were the Ciera's familiar Pontiac-built four and 3.0-liter Buick V-6. Even so, customers generally liked this new bottle of old wine, snapping up 100,000-plus in the first year and better than 150,000 of the '86s -- about midway between the similar Pontiac Grand Am and Buick Skylark/Somerset.

For 1988, Calais coupes and sedans grouped into base, luxury SL, and sporty International Series (the last replacing a GT package option), but the big news was the first twin cam, 16-valve four-cylinder engine in American production, the Quad-4. Designed and built by Olds and offered as an across-the-board Calais option, it delivered 150 rather rough and noisy horses, but was claimed capable of much more.

Olds proved it by adding a tuned 180-bhp version for 1989. A more-useful option that year was a new 3.3-liter derivative of the 173-cid Chevrolet-sourced V-6. Replacing the Buick-built 3.0, it also produced 160 bhp -- and more torque than even the "High Output" Quad-4. To fill in for the departed Firenza, prosaically named Value Leader Calais models appeared for '89 with less standard equipment and restricted options but lower prices.

Enthusiasts surely shuddered when the 442 returned (sans hyphens) as a performance option for the base 1990 Calais coupe. Olds said the name now designated "Quad-4, 4 valves per cylinder and 2 camshafts."

Even a hallowed name on an honestly speedy little car couldn't convince many that Olds still specialized in high performance the way it had in the '50s and '60s.