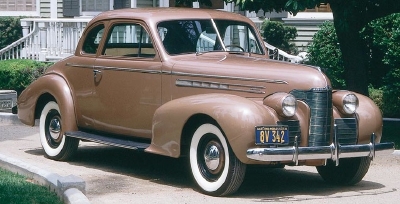 Oldsmobile targeted a specific consumer with names like the Oldsmobile Business coupe, shown here in a 1939 model with a new body style. See more pictures of Oldsmobile cars.

Oldsmobile suffered less from the Depression than most other makes, thanks to conservative but salable styling and a fairly consistent lineup of six- and eight-cylinder models. Its L-head six began the decade at 197.5 cubic inches and 62-65 brake horsepower.

Olds' first straight-eight, another orthodox side-valve design, arrived for 1932 with 240 cubic inches and 87 bhp. These smooth, quiet, and reliable power plants received important improvements as the decade wore on, such as aluminum pistons for 1936. The eight was otherwise unchanged, but the six grew to 213.3 cid and 74 bhp for 1932.

A major redesign for 1937 took the six to 230 cid and 95 bhp, the eight to 257 cid and 110 bhp. Additional changes that year comprised full-length water jackets, stiffer piston skirts and crankshaft, stronger cams and valve lifters, and longer valve guides. The eight continued in this form through '48, after which it was retired for the history-making overhead-valve "Rocket" V-8. The six would remain unchanged through 1940.

After that, the pace of change picked up. Though the division used the same GM B-body as Cadillac's junior-edition LaSalle and the smaller Buicks, its cars managed to look quite individual. More-massive fronts with cross-hatched or horizontal-bar grilles appeared for 1937; the 1938-39s had GM design chief Harley Earl's flanking "catwalk" auxiliary grilles, plus headlamp pods partly faired into the front-fender aprons.

Prices in these years were carefully contrived to target a precise area above Pontiac and below Buick and LaSalle. The range was $900-$1100 through 1932, after which Depression-prompted cuts lowered Sixes to as little as $650 by '34. Prices then inched upward again, returning to the initial spread by '38.

Beside choices in wheelbase, engine, and trim, Olds offered styling options such as side mount spare tires and -- a bit ahead of most rivals -- a choice of trunkless or "trunkback" sedans starting in 1933.

The two transmission innovations noted earlier deserve special comment. The first was "Automatic Safety Transmission" for 1937. This was a semiautomatic four-speed unit for eight-cylinder models that was similar in operation -- but not mechanically identical to -- Chrysler's subsequent Fluid Drive.

Before moving off, the driver depressed the customary clutch pedal and selected Low or High range. The transmission then shifted between first and second in Low; or first, third, and fourth in High. Changes within each range were automatic via oil pressure and two planetary gearsets. Shift points were preset according to vehicle speed.

Olds said AST delivered up to 15-percent-better gas mileage than regular manual shift, but that was due to the numerically lower rear-axle ratio specified. The "safety" aspect referred to the claim that, with less shifting to do, the driver could keep both hands on the wheel more of the time. AST was an option for all 1938-39 Oldsmobiles, and some 28,000 were installed. But its real significance was in leading to Hydra-Matic for 1940.

Though Hydra-Matic also had four speeds, it was fully automatic, using a fluid coupling and a complex system of clutches and brake bands. It arrived at only $57 extra. That surely didn't reflect its true manufacturing or development costs, but both would be offset by high volume.

Indeed, by the early '50s, Hydra-Matic had become not only a popular Olds option, but was also being offered by Cadillac and Pontiac as well as Lincoln and independents Nash, Hudson, and Kaiser-Frazer.

All three series listed business and club coupes and two- and four-door sedans, the latter pair available in the 70 and 80 lines with "Sunshine Turret Top," an optional sliding metal sunroof that saw few installations. The 70 and 80 also included a convertible coupe. Prices ranged from $777 to $1119.