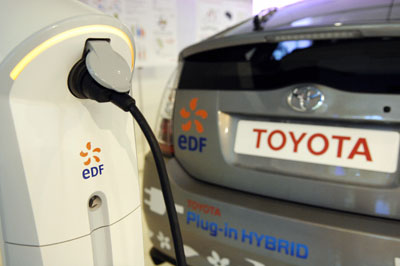 When gas-electric hybrid cars were introduced in North America in the late 1990s, they were hailed as an answer to growing concerns about climate change and oil prices. Since these cars run on both conventional gas engines and electric motors, they represent a decrease in fossil fuel consumption. The 2008 Toyota Prius gets 44 miles per gallon (mpg) overall [source: Consumer Reports]. This is a significant improvement over the fuel consumption of most conventional cars -- the 2009 Toyota Corolla XRS, for example, gets 22 mpg in the city and 29 mpg on the highway [source: JD Power].

­While hybrids have become increasingly popular since their debut, they're not entirely perfect. Yes, they release less greenhouse gas (GHG) emissions and offer better fuel economy, but they still require fossil fuels.

Auto manufacturers aren't intent on using up every last drop of oil on Earth before new technology is debuted. On the contrary, it's in the carmakers' vested interests to give their customers what they want. And the auto industry's customer base is calling for cleaner, more fuel-efficient cars than ever before. Hybrid car sales in the U.S. increased 38 percent from 2006 to 2007 [source: AP].

But some consumers aren't waiting around for the auto industry. Many Prius owners who wanted even more fuel efficiency have converted their hybrids into plug-ins with modification kits or by adding batteries to the cars. Toyota campaigned against these modifications for several years. The company wanted to establish the hybrid's reputation as a regular car -- one that customers didn't have to bother plugging in. At last, Toyota relented to the growing demands: A factory-made plug-in version of the popular hybrid is due out in 2010 [source: WSJ].

A plug-in hybrid is a desirable car for environmentally minded drivers. Hybrids use gasoline to fuel generators that charge their batteries. Charging the batteries through an electrical outlet at home (instead of with gas on the road) saves fuel and reduces emissions. But there are drawbacks to plug-in hybrids and even all-electric hybrids that use no gas at all. By using electricity, these cars also demand fossil energy, and in a roundabout way, still pollute.

So is there a way to create an all-electric car you don't have to plug in? Find out on the next page. 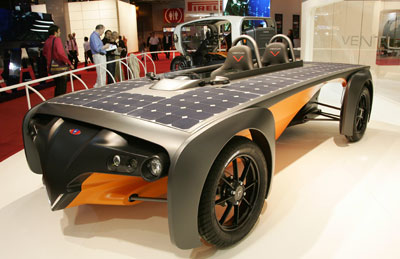