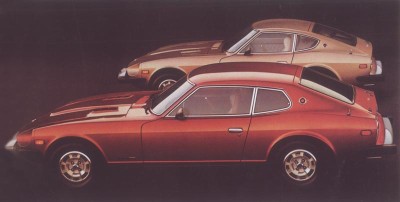 The last of the first-generation Zs bowed mid-1975 as the Datsun 280Z debuted.
©2007 Publications International, Ltd.

The Datsun 260Z and 280Z represented attempts to maintain sports-car-worthy performance for Datsun's roadster in an era of stiffening government regulations.

The term "emissions controls" was synonymous with disappointment for sports car enthusiasts in the 1970s. The compromises necessary to meet exhaust-emissions regulations almost invariably reduced power and drivability. Enthusiasts dreaded the news for each coming year -- how much performance would be lost with the new model?

Manufacturers weren't any happier than the enthusiasts. Providing some semblance of the performance that customers expected proved difficult. The reduced power per cubic centimeter -- plus added weight from federally mandated "safety bumpers" and the like -- prompted automakers to add engine displacement to prevent losses in performance.

New technology, such as a transistorized breakerless ignition system, increased reliability and aided emissions control. The carburetors still suffered from vapor lock, and although the 260Z was quicker than the last 240Z models, it was still slower than the original Z. And lean surge, the scourge of the 1970s, and dieseling (run-on) remained.

The exterior of the Datsun 260Z was changed as little as possible from the 240Z's classic lines. With sports cars allowed a one-year deferral from full compliance with the 5-mph bumper rule, the 1974 Datsun 260Z had discrete black rubber nubs as part of a new bumper system added at the end of the previous model year. The new, heavier bumpers prompted stiffer springs and a rear stabilizer bar.

The 1974 models also got the new U.S.-government-mandated seat belt/ignition interlock, a system that prevented the driver from starting the car unless the safety belts of occupied seats were fastened.

Early Datsun 260Zs like this one retained a reasonable bumper profile, before regulations enlarged it.
©2007 Publications International, Ltd.

Nissan also supplemented demand for the Datsun 260Z by adding 11.9 inches to its wheelbase and adding a pair of contoured buckets under a redrawn roofline. The rear seats were really more suited to children than adults, making the 260Z 2+2 Dad's last sports car before getting a family sedan. Most buyers preferred the two-seater, but the 2+2 proved Nissan knew how make the best of a good thing.

Bumper size increased again late in the 1974 model year. With minor changes elsewhere, these were called 1974-1/2 models. It added another 6.3 inches in length and another 130 pounds. At least the 1975 models were unchanged, and lasted only until being replaced midyear by the new Datsun 280Z.

As the name suggests, the Datsun 280Z had a displacement of 2.8 liters, achieved by stroking the 260Z's motor by 3 mm. Despite an emissions-control-inspired 8.3:1 compression ratio, output climbed to 149 horsepower.

No doubt the replacement of fussy carburetors with Bosch L-Jetronic fuel injection had something to do with that. Lean surge, hesitation and other smog-motor evils were all but history as well.

California cars also got catalytic converters for the first time. The result was that the Datsun 280Z's performance nearly matched that of the original 240Z, and did so on regular-unleaded gasoline rather than the 240's diet of leaded premium.

The 1976 Datsun 280Z was unchanged except for a voltmeter replacing the ammeter, but in 1977, a 5-speed manual finally became optional. The overdrive-5th gearbox cost $165 over the standard-equipment 4-speed. Although engine specifications were unchanged, horsepower increased to 170 at 5600 rpm. With a new model forthcoming, changes were limited for 1978, most notably a standard AM/FM radio and, for the first time, black as an available color.