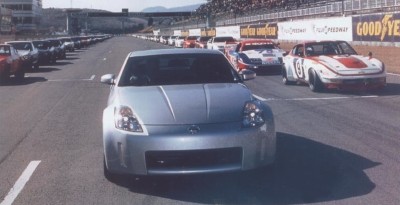 It's a rare occurrence when a single model is a window into the soul of an entire car company, as is the case throughout the history of the Nissan Z. It's rarer still when that passion involves a full-line automaker with offerings in all of the major market segments.

The Z exists in that special place, in the hearts of the more than a million owners of Zs around the world past and present; in the enthusiasm of the hundred-thousand-plus Nissan employees, dealers and suppliers; in the buzz on the street.

As Nissan President Carlos Ghosn stated upon the unveiling of the all-new 350Z at the 2001 Tokyo Motor Show, "In the fall of 1969, Nissan introduced a two-seat sports car that revolutionized the automotive world at the time. It had European styling, American muscle, Japanese quality and global desirability."

He was talking, of course, about the Datsun 240Z in North America and Europe and the Fairlady Z in Japan and Asian markets. From the founding of the company in 1933, Datsun was the brand all Nissan passenger cars and light trucks were sold under in North America until the early 1980s.

Nissan Motor Company had been a miracle of industrial progress following World War II. Nissan was the first Japanese company to introduce sports models in the United States. In the 1960s and 1970s, its Datsun products were perceived as forerunners of modern design, durability and value in their respective market segments.

Global sales growth was phenomenal. At the time, Datsun was the top-selling Japanese brand in the United States. The arrival of the 240Z in the 1970 model year cemented its reputation as a maker of bold, leading-edge cars and trucks, from the stylish, great-handling, affordable 510 sedan and wagon to the durable, tough-as-nails Datsun mini pickup truck.

By the mid-1970s, Datsun had passed Volkswagen as the best-selling import brand in the U.S. Datsun was well on its way to selling a million Zs worldwide in just two decades.

Sensing its Japanese name, the Fairlady Z, was not right for the U.S., Nissan used its internal model code to name the Datsun 240Z.
©2007 Publications International, Ltd.

For his part, Yutaka Katayama, the president of Nissan Motor Corporation in U.S.A. during this time, was an astute observer of American tastes and trends. Mr. K, as he is known to his friends and colleagues, was keenly observant of the rapidly growing sports-car market in the United States.

He became aware of a new, more-affordable GT car under development by Nissan engineers in Japan that was of exciting and different design, with crisp performance and excellent handling, but with more comfort and practicality than the European two-seaters of the day. He lobbied hard to bring what would become the Datsun 240Z to the United States as a beacon of performance and quality for the brand.

Upon the car's unveiling at the 1969 New York International Auto Show, Katayama said, "The 240Z represents the imaginative spirit of Nissan and was designed to please a demanding taste that is strictly American. Nissan offers this spirited car with affection. Its heart is Japan and its soul is America."

In his way, Katayama was a pioneer in the global approach that was to serve Nissan well in the ensuing decades. And in its role as the icon for the Datsun, and later the Nissan, brand, the Z cemented that company's image as an innovator across many product lines.

It's a legacy planners at Nissan were well aware of in the late-1990s when they sought to bring back a new Z. In developing the 350Z, the operative phrase they used to describe it was, "Lust, then love."

Chief Product Specialist John Yukawa explained. "The customer wants to purchase the Z at first sight because of its excellent design, And afterward, he goes on to love the Z forever because of its high performance." It was this overriding principle that was to guide the 350Z's journey, a voyage to find and re-establish Nissan's emotional core.

But legacies often have humble beginnings. Madonna worked in a pizza parlor before singing and dancing her way to stardom. Bill Gates was a computer nerd and Harvard dropout before creating a software empire that made him the richest man in the world. Likewise, Nissan didn't just throw a switch and sell more than 1 million Zs.

In the 1950s, Nissan acted on its philosophy that some drivers wanted more than mere transportation. It was the first Japanese car company to add sports models to its lineup.