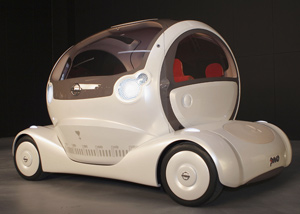 In 2005, Japan's Nissan Motor Co. unveiled a most unusual-looking concept car at the Tokyo Motor Show. Appearing to be part robot, part octopus and part fishbowl, the Pivo defied categorization. The first Pivo, a fully electric battery car, turned many heads while being environmentally friendly. When Nissan followed up two years later with the Pivo 2, people gawked at the technological innovations as they eventually found themselves wondering, can your car actually be your friend?

Both cars wowed the auto world with high-tech advances. Pivo mated a rotating, pod-like cockpit with an electric battery-powered chassis. Nissan engineers skipped the bulky mechanical linkages found on most modern cars in favor of video game-inspired "by-wire" controls that save space and weight. Pivo's high-tech components lay swaddled beneath fluid bodywork and its three-person interior enveloped occupants like trendy lounge chairs. The goal was to create an inviting and eco-friendly vehicle for dense urban environments.

If you happened to actually get your hands on the steering wheel of a Pivo -- you can't, by the way; they're not for sale and aren't currently planned for production -- you could change directions by simply pivoting the cabin. Nissan considered this a vital aspect of the car's design, since its name is a play on the word pivot.

Imagine: No more clumsy three-point turns. Actually, you can say goodbye to three-point turns altogether, since the rotating cockpit eliminates the need to shift into reverse. No more nervous U-turns -- the kind that make you wonder if you'll scrape the far curb. You can finally say sayonara to parallel parking panic attacks, since you could drive the 2.7 meter (9 feet) long Pivo sideways into the tiniest of curbside openings. With the Pivo 2, Nissan developers took innovation to another level, incorporating elements of artificial intelligence into the design with an on-board, robotic "buddy" that aids the driver.

Masato Inoue, one of the Pivo's lead designers, said on Nissan's website that his team's goal was to change the very definition of what a car is. For now, here's a peek at the Pivo and the possible future of automotive technology. 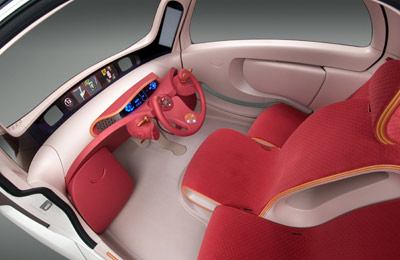 On first glance, you'll love the look of the Pivo or hate it. Either way, there's no denying its originality. Pivo's developers practically scrapped a century's worth of automobile design convention, including the design axiom that a car must have a definitive front and a distinct rear.

With the Pivo, the front becomes the rear. Or is it the other way around? Whatever the case, anyone who's ever exhausted his or her arm muscles twisting a steering wheel can appreciate the Pivo's pivoting cockpit. To turn around, simply pivot the passenger compartment (as opposed to the entire car) and proceed in the opposite direction. Should you choose to make a conventional U-turn, the Pivo's independent steering system allows you to cut a much smaller turning radius than you could in an ordinary subcompact car.

The car seats three, with the driver positioned in the center and room for two passengers close behind. While the original Pivo lets passengers enter the car from either side, the front of the car hinges sideways on the Pivo 2 as the headlights, front windscreen and forward-facing part of the body serve as the door.

On a typical car, side view mirrors might have a label on the glass that reads, "Objects in mirror are closer than they appear." Ideally, you'd like to know exactly how close before you've traded paint with that classic 'Vette in the metered spot behind you. Nissan's around-view monitor eliminates the guesswork by creating a bird's eye view of the Pivo and its surroundings. Here's how it works: Four wide-angle, high resolution cameras and four sonar sensing units around the vehicle send their data to an image-processing computer. The processor blends the images, cleans them up, and produces a virtual top-down image of the car that appears as if it were being taken by a helicopter overhead. Combined with live images from the front and rear cameras, the driver can accurately gauge distance from the curb [source: Nissan Global].

In the Star Wars series, R2D2 served as a co-pilot, personal concierge and unlikely hero. Go to the next page to read why the Pivo 2's Robotic Agent has drawn comparisons to the tiny, talkative droid. 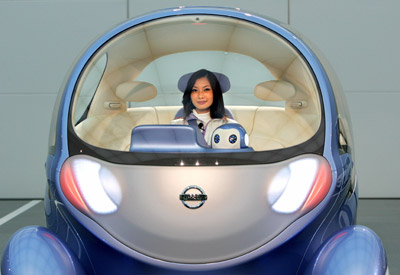 Unlike most backseat drivers, this little guy shouldn’t annoy you … too much.
Kazuhiro Nogi/AFP

For many people, driving a car is like being in a mobile cocoon, free to ponder their thoughts, fears, hopes and favorite tunes. Unfortunately, according to Nissan, people become demonstrably worse drivers when they're upset. Too bad you can't just give up the keys and cool off for a couple of hours after a soul-sucking day at work or school.

Believe it or not, the Pivo 2's Robotic Agent might actually help with that foul mood of yours. With its oversized, electronic starburst "eyes" (actually facial recognition cameras), choreographed nods and head turns, the Robotic Agent's job is not unlike that of the fictional R2D2. The Agent keeps the driver alert and cheerful while providing important driving data like directions or distance. Fortunately, you don't need to decipher strings of chirps and whistles to understand what the Robotic Agent is saying. In videos released by Nissan, "he" clearly speaks English or Japanese in a cutesy, child-like voice. The Agent also uses complex facial-recognition programming to keep track of the driver's facial expression, including eye position, eyebrow height and even smiles and frowns.

The Robotic Agent has been compared to an in-dash bobble head doll. One automotive journalist said the Robotic Agent "looks like a starry-eyed robot-monkey head. Or an alien. Or both" [source: Jurnecka]. Lead designer Masato Inoue said Nissan was going for an organic, alive look and feel -- not to creep people out, but to engender feelings of closeness with the car.

"If the Pivo was the ultimate definition of 'cute' for a car, then the Pivo 2 is more similar to a living creature," says Inoue. "What I meant by changing the design definition was to shift from 'mechanical design concept' to a more 'human design concept.' The car becomes more like a partner via the personal-assist and companionship delivered by the Robotic Agent. This results in a feeling to 'hug it' and the 'desire to be together more."

Inoue added: "The design is the emotive part, while the movements represent innovation … most robots depicted in movies rotate their heads sideways, giving a clear impression that it is a 'machine.' Hence, we gave our Robotic Agent a vertical motion as well, as if it nods. This motion appears more 'warm' and human-like" [source: Nissan Global].

Go to the next page to find out how the original Pivo differs from Nissan's follow-up, the Pivo 2.

While the Pivo's designers sought to create a car that was practical, earth-friendly and innovative, the label that the first Pivo seemed to elicit most often was "cute." The Japanese might call it "kawaii." In any language, that reaction was just fine by the designers, who designed the original Pivo to address relatively mundane driving worries like parallel parking. Nissan conducted extensive research at the time to figure out what made people calm and alert behind the wheel. This emphasis on cuteness over more aggressive styling was part of the packaging.

When Nissan began building the next-generation Pivo, they wanted drivers to see it not only as a cute contraption, but as an extension of themselves. We'll discuss that idea in greater detail later on. For now, consider these differences between the first-generation and second-generation Pivo, which debuted in 2005 and late 2007 respectively:

Both versions are full battery-electric vehicles, as opposed to gas-electric hybrids. The Pivo 2's lithium ion battery pack gets between 60 and 78 miles (97 to 126 kilometers) to the charge, and the car plugs into an ordinary household electrical outlet.

How does the Pivo's electric motor work? While the Pivo and Pivo 2 are both powered by advanced lithium ion batteries, both models take fundamentally different approaches in how they deliver power to the wheels.

The first Pivo's chassis base housed cylindrical front and rear-axles, each containing a powerful electric motor called the Super Motor. One motor powered the left and right wheel on each axle. On the Pivo 2, each wheel is housed in its own, movable pod-like enclosure. Each wheel is able to turn within its enclosure, making each individual wheel capable of more than 90 degrees of turn. Nissan calls this the Metamo system, and it allows two neat things to happen. It makes the Pivo 2 extremely agile, as it can drive sideways like a scuttling crab. It can also enhance stability when accelerating, decelerating or entering tight turns and curves.

Go to the next page to learn how the Pivo's innovative technologies put the driver first.

So, when can we actually buy this thing?

While many of the assorted techno-advances found on the Pivo will eventually see the light of a dealer's showroom, don't expect to put down a deposit on a Pivo 2 anytime soon. Nissan says that while the car is fully functional -- and that's saying quite a bit for any concept car -- it's too expensive to place into production right now. Still, car industry observers expect some of the innovations found in the Pivo 2 to appear on other cars soon. 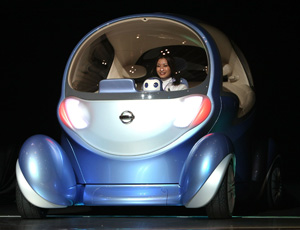 Ever found yourself annoyed by that "hump" that boxes your legs in when you're riding in the rear seat of a rear-wheel drive car? That hump is known as the transmission tunnel. If you're on the taller side, perhaps you've felt claustrophobic in cars where the steering wheel sits too close to your body. The steering column was the culprit there. If you're shorter in stature, you might find yourself frustrated by having to peer over what can seem like acres of hood. The hood is so long because it must accommodate the engine's bulk.

In all these cases, the driver -- the human element -- takes a back seat to mechanical considerations. Pivo uses Nissan's "friendly innovations" to put people first in the auto design equation. A key enabling technology is the Pivo's by-wire control systems. By-wire means that the Pivo's steering and braking systems are controlled by electrical impulses rather than direct mechanical linkages. This saves considerable space and weight, two important variables in any vehicle.

Take, for instance, the steering system. As the driver, you only see the steering wheel. But the wheel is really a lever that allows you to rotate the steering shaft. That shaft connects to what's known as the steering gear, or steering linkage. That, in turn, hooks up to the tie rods. If the car has power steering, that will cost you even more weight, space and efficiency. You'll need a power steering pump, power steering fluid lines and enough engine power to run the pump. On the other hand, the Pivo's by-wire steering starts with a steering wheel that looks a lot like a video game controller. Instead of all the linkages and grease-filled boots you'd find on an ordinary car, Pivo converts the driver's steering commands into electrical signals. Wires transmit the commands to small actuators at the wheels.

If you'd like to learn more about the Pivo and other car technologies of the future, be sure to follow the links on the next page.

Nissan is neither the first nor the only vehicle maker to use by-wire technology. For example, General Motors uses it in its Hy-Wire hydrogen-powered concept vehicle as well. And long before either of them, one of the earliest uses of by-wire controls was on jet fighters. The F-16 Fighting Falcon's "fly-by-wire" system earned it the mocking nickname the "Electric Jet" early in its career, but pilots raved at how quickly the craft responded to their input and how stable electronic controls made the plane in flight.