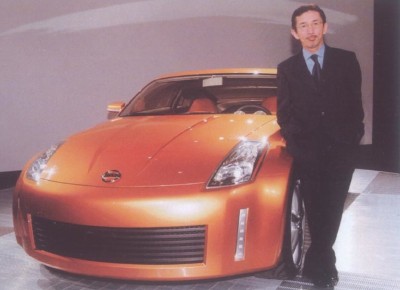 In a 2002 interview, Shiro Nakamura, the senior vice president of design for the Nissan Motor Company, talked about what the 350Z meant to Nissan.

Q: In today's marketplace, there are many sports cars from a variety of automakers. What characteristics did you incorporate into the new Z to make it stand out?

Nakamura: We want a design that's unique and perhaps reflective of Japanese culture. So the Z should be a Japanese sports car. In the Z, there's a certain balance of attributes that represents our core values: Performance with relaxation. Organic beauty with mechanical detail. Excitement with practicality. These are some attributes we were seeking in this

Q: Some might consider sports cars a window into the soul of an automaker. What does the all-new Z say about Nissan?

Nakamura: When we started the design, we explored concepts of newness and Z-ness. We felt the strongest places to look for Z-ness were the first 240Z and the last 300ZX. There are elements of these cars you'll see in the new Z.

At the same time, we didn't want to go retro like a BMW Z8 or Ford Thunderbird. We felt we needed to move ahead to the 21st Century. We didn't want to be stuck looking back, but felt it was good to study the design language to determine what we were doing right back then.

The proportions of the new Z are much different than anything we have done before. The wheelbase is longer, tires are at the corners of the body, and the beltline and hip point are higher. That makes the new car much easier for ingress and egress. That's important because as you get older, it's much tougher to get into your average sports car.

There's more headroom and greater outward visibility now, too. So proportionally, the 350Z is all new. We carefully studied sports-car architecture, but the new Z is a completely new statement.

The vibrant color red was included as part of an early interior proposal for the 350Z.
©2007 Publications International, Ltd.

Q: How did the interior design evolve?

Nakamura: The first interior design we worked with was more futuristic, more angular. The difference between the asymmetric front seats was more pronounced, with the driver's seat much closer to a full racing seat. I decided a sports car interior needed to be long-lasting and a bit more functional and authentic, yet dynamic. We worked toward creating an atmosphere where the driver is comfortable and can easily concentrate on the joy of driving.

There was also a lot of attention to making the details delightful to look at, to touch and, in the case of controls, to use. We took note of the use of real aluminum in the Audi TT and came up with our own creative use of that material. The upper part of the dash is curved away, creating a feeling of openness and lightness not unlike the concave upper body sections.

We developed orange illumination for interior lights and controls because it is distinctive and soothing. The manual shifter is shaped and padded in certain areas to feel pleasing in the driver's grasp, yet has a direct feel for moving side to side between gates. Switches and controls have a precision feel like an SLR camera or well-made tool.

There's a gorgeous trimmed strut bar in the cargo area that aids handling and is a focal point of Z-ness. No one else has that. We spent money inside the car where the driver spends his time and can enjoy it.

You know, I am involved in numerous new car projects, but I spent a disproportionately large amount time paying attention to the details of the new Z. I felt the buyer will judge Nissan by the quality of the Z. It's everything for Nissan. If the Z car has good quality, then Nissan gains credibility.

Q: Many car enthusiasts grew up on reliable, inexpensive-to-operate Japanese cars such as Sentras, Corollas and so forth. Now that they may be successful and are thinking about perhaps buying a sports car, many are looking to European brands that have cultivated the sporty image for many years. How will the new Z make them think of going toward a Nissan instead?

Nakamura: I think we need to embody all of the elements that made the first Z such a success: crisp styling, good performance and an affordable price. But we need to do so in a 21st-century landscape, not using the styling of the first Z but rather the innovative thinking that sired it. No other sports car can quite equal the Z's balance of performance, design and practicality.