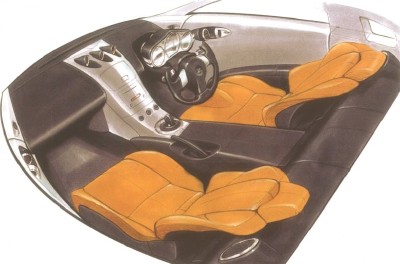 This Nissan Design Center sketch of the 350Z interior shows how it tapers away from the occupants.
©2007 Publications International, Ltd.

After all Advanced Phase interior concepts were evaluated, it was determined the NDC design would move forward to the production phase. In the ensuing months, NDC designers worked with engineers to refine the details, and the finished product is the one you see in the 350Z today.

Newness, high quality and Z-ness were also hallmarks of the new car's interior design. The cockpit had a spindle-like shape when viewed from the top. It kept maximum cabin width where the driver and passenger sit, tapering like a speedboat fore and aft to create a sporty feel.

The fusion of contrast that guided overall 350 Z design was applied to the interior as well. The door, for example, had a soft, emotional shape but the inside parts like the door release handle were geometric for contrast.

New vinyl grain contrasted the mechanical look of high-tech metal versus the animal-like warmth of leather-like grain. Even the Z's strut tower brace carried a message about the design with a special aluminum finish to emphasize superior chassis performance.

The use of high-quality materials inside the car was of paramount importance because this is where the driver spends most of his time.

"There's real leather on the shift knob, steering wheel and handbrake lever. The back of the main instrument tilt meter that [product chief designer Mamoru] Aoki's group did at NDC looks like expensive clocks or stopwatches. Switchgear mirrors Sony products in look and feel."

An interior proposal from Nissan Design America portends the use of aluminum on the center console.
©2007 Publications International, Ltd.

Nissan also investigated the function of interior components in competitors such as the BMW M Coupe, Porsche Boxster S and Honda S2000. They evaluted armrest placement and comfort, stereo sound quality and volume, cupholder/coinholder/ashtray location and ease of use, and available storage room for valuables, cell phone, purse and CDs.

The 350Z kept the feeling of the 240Z with triple gauges in the center stack for oil pressure, voltage and drive computer, while being more modern with a gently slanted, T-shaped dashboard not unlike the last 300ZX. Z emblems on the steering wheel, dash vents, kick plate, strut tower bar and front fenders further celebrated Z-ness. The Z emblem itself was a symbol of parts design, an arching, geometric rectangular combination.

Overall, the interior of the 350Z was designed to provide both a tailored, anchored feeling during spirited driving and a livable feeling when cruising at a relaxed pace. The design became a mindset.

"I'm going to buy a Z car until I can't walk anymore," Semple said. "I've always loved sports cars. It doesn't have to do with the age of the person; it's the 'want' value. When you look at this car, you want it, you need to have it and you will do whatever you can to get it."