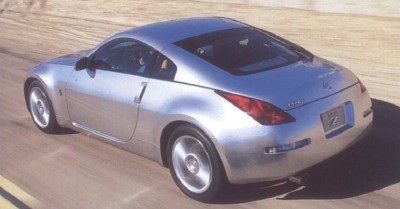 The rear-quarter view of the 350Z is the favorite angle of chief designer Mamoru Aoki.
©2007 Publications International, Ltd.

The 350Z design philosophy is full of dichotomies, from soft curves offset by hard geometric forms, to the delicate balance of fitting a modern look to the objectives of the original 240Z.

"The Z's newness begins with its nimble form -- like a Formula One car or Lotus Super Seven," product chief designer Mamoru Aoki explained. "We tried to shift the mass of the car to the center by using a curved body plan and moving the wheels as far to the corners as possible." The 350Z's new look was also supported by a long wheelbase and short overhangs -- about four inches shorter than those on the 1990-1996 300ZX.

Tapered corners also contributed to the design. "If you see the car from a quarter-view, the overhang looks like almost nothing. We reduced the corner mass to emphasize the short overhang proportion," Aoki said. "A concave top body section above the side creases also helped reduce the volume feeling."

Certainly, a new direction was being cultivated in the Z with what Aoki called a "fusion of contrast. We tried to create a new design direction for Nissan by mixing emotional and geometric expression. You can see it in the very soft and emotional body shape contrasted with the sharp and rectangular outside door handle."

Aoki continued, "The soft, warm emotional forms are juxtaposed against the sharp, cold geometric ones. There are wild and bold elements that make the design dynamic combined with elegant and simple ones that are more sensitive."

Also important to the design of the new Z was a feeling of high quality. Aoki explained, "The new Z is actually affordable, but aesthetically of high quality like a more-expensive car. You can see it in the parts quality, from the projector free-form headlamps, to the door handles, to the dual exhaust outlets."

And Z-ness represented another major design objective. Aoki continued, "The original 240Z represented nimbleness and affordability. From it, we adopted the small, triangular-shaped cabin, long nose and short deck. And the last 300ZX represented contemporary design. We used its C-pillar treatment and hatchback cut-line."

Aoki admitted his favorite angle of the 350Z is the three-quarter rear, but Patrick Pelata, executive vice president during the 350Z design phase, had many favorite views. "The rear is very powerful with the dual exhausts and rounded corners. You can almost feel the stability and its short-coupled character. The side view is very characteristic of the car's Z-ness."

Pelata continued, "The front was difficult in the beginning, but I think it's now very distinctive and everyone will recognize its Z family legacy. But if I had to choose one angle, it would be the side view, because there you have both the history of the Z and the new Z with its very large wheels and tires stretching out of the body."

Designers even found a way to convey their philosophy in the 350Z badge.
©2007 Publications International, Ltd.

Aoki summed up the design efforts succinctly. "We wanted to create a modern, contemporary sports car that looked totally new, but would be immediately recognizable as a Nissan Z. The new car would be very affordable, but have the appearance of a much more expensive car."

His favorite detail? The Z badge itself, and the symbolic meaning it carries. "The three square-chisel dots or hash marks on the diagonal of the Z badge represent the qualities we were trying to embody in the car: newness, high quality and Z-ness."

It was these qualities that would guide practically every step of the designers, engineers and product planners as their long journey continued.