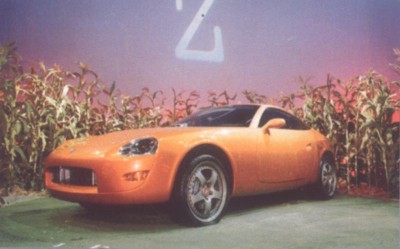 The 1999 Nissan Z concept car was introduced in a Field of Dreams setting in New York.
©2007 Publications International, Ltd.

The 1999 Nissan Z concept car was built as a running model for the North American International Auto Show in Detroit after its predecessor from the previous year was well-received by dealers.

Like the Nissan Mid Sport prototype from 1997, the 1999 Nissan Z concept car used the rear-drive platform of the Silvia coupe (240S IX in the U.S.) and a 200-horsepower, 2.4-liter 4-cylinder engine. The concept car wasn't an approved project by Nissan Motor Company in Japan, so funding was unavailable. But Mike Seergy, then Vice President of Nissan Division, cleverly tapped other budgets, and the Z concept was off to the races.

Within 12 weeks, from first drawing to running vehicle, the 1999 Nissan Z concept car took shape. With its long hood and abbreviated tail, "this vehicle is the antithesis of the current cab forward school of design," exclaimed Tom Semple, then president of Nissan Design America. "We want the casual onlooker to know this is a powerful front-engine, rear-drive vehicle," he said.

Apparently, observers saw the sugar-scoop headlamps, large rectangular radiator cutout and overall aggressive, sporty look of the car and concurred. Despite a huge January blizzard that stranded thousands and kept many attendees from making it to Detroit, the 1999 Nissan Z concept car was The Buzz of the show. The big question was, would Nissan build it?

The answer came four months later in dramatic fashion at the New York International Auto Show. Taking a cue from the Kevin Costner film Field of Dreams, the show stage found Minoru Nakamura, then President of Nissan North America, Inc., on a bench beside a field of showbiz corn.

He held an enlarged copy of Road & Track magazine, which featured on its cover International Editor Sam Mitani's Z-concept story. As Nakamura read Mitani's entreaty to Nissan, "If you build it, they will come" the "corn" parted to reveal the Z concept. Nakamura stood and announced to a packed auditorium at the Jacob Javits Convention Center that Nissan would build a production Z.

In truth, approval to build it came just on the eve of the show. Understandably, Nissan Motor Company Chairman Yoshikazu Hanawa was preoccupied with the corporation's partnership with Renault. With billions of dollars and thousands of jobs at stake, finding funds to produce a relatively low-volume sports car would seem a low priority.

But Hanawa recognized the Z's symbolic value to the brand. Upon the announcement, a huge banner unfurled from the top floors of Nissan North America's Gardena, California, headquarters proclaiming, "We will build it." No one had to explain what "it" was.