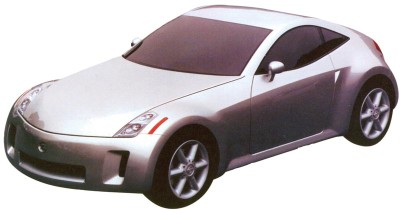 By the 1998 model year, Nissan North America, Inc. had simplified its model lineup to concentrate on the higher-volume sedans and trucks, a distinct shift away from the type of emotional appeal represented by the 1998 Nissan Z concept car and its ilk. But aside from the new Frontier pickup, most of the models being sold were already a few years into their product cycles.

New product was on the way, however, and Nissan North America, Inc. got the idea to afford journalists, Wall Street analysts and key Nissan dealers a "peek under the kimono" to keep interest high until the new models in the pipeline could hit the streets. The Road Show, as it was called, would first travel to New York, then Nashville (near the Smyrna, Tennessee, Nissan assembly plant), Detroit and finally Los Angeles.

The show would include concepts as well as products slated for future production, such as the Xterra and next-generation Sentra and Maxima. In the spring of 1998, then-President of Nissan Design International Jerry Hirshberg, and former VP of External Affairs Jason Vines, got an idea to come up with a concept car that represented the soul of Nissan. What else but the Z?

Tom Semple, president of Nissan Design America at the time, remembers the excitement. "Jerry and I self-assigned ourselves to that car in a way. It started out from a little thumbnail Jerry had done in Red Studio. The idea was to look to the past and come up with an iconic car. There was a great deal of controversy here at Nissan Design International [the former name of Nissan Design America] about whether this car should be deferential to the original 240Z or a whole new statement."

Vines recalls the chain of events as they unfolded. "They brought an old 240Z owned by an NDA employee into the studio and started noodling on what a contemporary Z might be like. They played 1970s music, put pictures of 1970s things on the image board, but after a while they had to take the old Z out of the studio because it was overpowering their thought processes."

Semple continues, "In the end, we opted for something that had some references to the original Z because we wanted the concept to be seen as a Z, accepted as a Z, but not be totally retro in that sense. Some people saw it as retro; others did not."

Hirshberg and "his kids," as Vines called them, literally ran out of time and money. The NDA designers finished just three sides of the clay model, and 48 hours before the start of the New York Road Show, the Z concept was loaded into a semi in LA with two drivers and sprinted almost nonstop to the Big Apple. Literally a work in progress, one side of the Z concept remained in unfinished clay, as if to give a hint of exciting things to come.

The Z concept turned out to be a maverick trial balloon. Nissan Motor Company Chairman Yoshikazu Hanawa traveled from Tokyo to New York to view the displays.

Semple recalls, "We got a lot of reactions from that car. It made the covers of quite a few automobile magazines. There was some criticism of it looking too retro and not enough of what the future of Nissan was about. Some people loved it; some people didn't. But the important thing was people were talking about Nissan again."

Vines adds, "The dealers were over the moon. They had tears in their eyes. Some of them actually cried with joy."