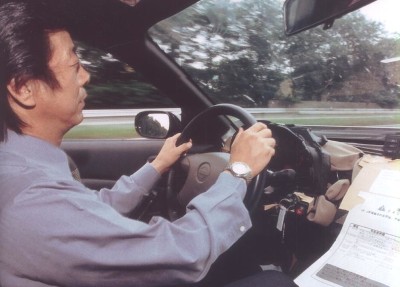 It's an overused saw to say that racing improves the breed, but in the case of 350Z racing research as applied by Chief Vehicle Engineer Kazutoshi Mizuno, nothing could be more to the point. In the 1980s, he was involved with Nissan racing cars, during which time he pioneered a new human-centered approach called the Flat Ride concept.

Mizuno explained, "I developed a purpose-oriented rationale for the front mid-ship concept in 1989 when I was a race-car developer and team supervisor for NISMO. We were heavily involved in building a Group C car for the 24 Hours endurance races at Daytona and LeMans. We developed a racing car with full active suspension, but due to regulation difficulties, the car never made it to the track.

"Not too many people know about it, but the ride of this machine was incredible. You could slam on the brakes and it wouldn't dive. You could turn hard and it wouldn't roll through the turns. It was stable on the straightaways at any speed. The car was always flat.

"The drivers were excited," Mizuno continueed. "This is what I call sport! This is the car of the future!"

To Mizuno, the benefits seemed obvious. "Up to that point, race cars had super-tight suspensions, and you couldn't drive them without strapping yourself down into the bucket seats for the inevitable cornering forces and hard ride.

"But in our race car the drivers could concentrate on the race track and not even break a sweat. All they had to do was concentrate on controlling their car. This is what Flat Ride is all about. The concept of sport has been redefined. That's when I realized that this is the ride of the 21st Century."

The Nissan Group C car didn't compete at LeMans that year, but a production-class Nissan Skyline GT-R did and finished 10th overall. Mizuno and his team members transferred some of the Flat Ride thinking from the active-suspension car to the LeMans GT-Rs.

"We placed the engine and fuel tanks towards the car's center of gravity," he said. "To improve the straight-line stability through the long straightaways at LeMans, we increased the wheelbase and redesigned the undercarriage for better aerodynamics. To accommodate different drivers during the endurance race, the gauges were tilt adjustable. We didn't know it then, but this thinking eventually became the origin of the front mid-ship package."