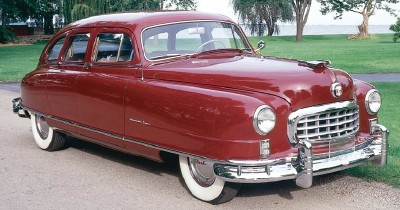 The 1950 Nash Ambassador featured the GM-purchased Drive and more horsepower than earlier models.

Optional Hydra-Matic Drive (purchased from GM) arrived for 1950, along with three more horsepower for each engine. The 600 was renamed Statesman. The rear windows were enlarged to improve visibility, though it was still pretty poor. Prices remained competitive: under $2000 for Statesmans, $2060-$2200 for Ambassadors.

New for '51 were extended and raised rear fenders that softened the "beetleback" look, plus new grilles. As in 1950, trim levels comprised base Deluxe, midrange Super, and top-shelf Custom, an arrangement Nash would keep for most of the rest of its days. Prices again changed little, but the public was tiring of "bathtubs", so production eased to about 153,000, again minus Rambler.

The new 100-inch-wheelbase 1950 Rambler was the very antithesis of the huge Airflyte. Though several Detroit auto­makers had attempted smaller cars before World War II, Rambler was the first to sell in significant numbers.

Interestingly, Ford and Chevrolet briefly considered compacts after the war, but their concepts were quite different from Nash's. As George Romney, then Mason's top assistant, once said: "It's one thing for a small company -- a marginal firm -- to pioneer a new concept like that and really push it. But it's another thing for people who already have a big slice to begin pushing something that undercuts their basic market." Still, the Rambler's early sales success didn't go unnoticed at the Big Three, who would follow Nash's lead -- though they'd take ten years to do so.

Small cars fascinated George Mason, who knew that the independents couldn't hope to survive in the postwar market without offering types of cars that the Big Three didn't. Together with chief engineer Meade Moore, Mason hammered away until the Rambler (and later the Metropolitan) was a reality. It arrived just as the sell-anything era was ending, and it would keep Nash's head above water through its 1954 merger with Hudson. Three years later, the resulting American Motors Corporation would be selling Ramblers almost exclusively.

The 1950 Rambler saw little change through 1952. Only two models were offered initially: a Custom two-door wagon and the interesting Custom Landau convertible with fixed side-window frames. A pretty hardtop coupe called Country Club was added for '51, but most sales came from the practical, attractive ­wagons (called Suburban after '51).

In those early days of all-steel models, Rambler accounted for 22 percent of total U.S. wagon sales. All these Ramblers carried Nash's smaller 82-bhp L-head six, good for a claimed 25-30 mpg. The '52s maintained the 1950-51 pace, recording just over 53,000 total sales.

Quotable road-tester Tom McCahill of Mechanix Illustrated magazine once wrote that Mason and Nash were "busier than a mouse in a barrel of hungry cats." As proof, Mason busied himself with a sports car in these years. Called Nash-Healey, it started with a chance meeting aboard the Queen Elizabeth between Mason and famed British sports-car builder Donald Healey, then looking to buy American engines.

Their meeting led directly to a low, slab-sided, two-seat roadster appearing in 1951 with a 102-inch wheelbase, British-crafted aluminum body, and an Ambassador six tuned for 125 bhp. Healey built it at his small works in Warwick, England.

Even so, the N-H became better as it went along. Handsome steel bodywork shaped by Italy's Pinin Farina bowed for 1952. The next year brought a six-inch longer wheelbase for a companion coupe called Le Mans (honoring high N-H finishes at the French 24-hour race in 1951-52).

Nash also offered a 140-bhp dual-carburetor option, but canceled the roadster after '53. The high cost of transatlantic shipping pushed the price over $6000 by the end, but every Nash-Healey was a genuine dual-purpose sports car: quick and nimble on the road, yet strong enough for the track.

Mason so liked Farina's N-H restyle that he asked the designer to shape a new big Nash for 1952. Farina submitted two proposals, but the end product was mostly the doing of Nash's own Edmund A. Anderson. The only surviving Farina elements were a simple, square grille and a three-element wraparound rear window.

Still, the 1952 Statesmans and Ambassadors were good-looking notchbacks that wore "Pinin Farina" badges, just like post-'51 Nash-Healeys. Nash called them "Golden Airflytes," honor­ing the firm's 50th birthday that year. Unfortunately, integral front-fender skirts, as on the 1949-51 "bathtubs," made for huge turning circles and difficult tire-changing.