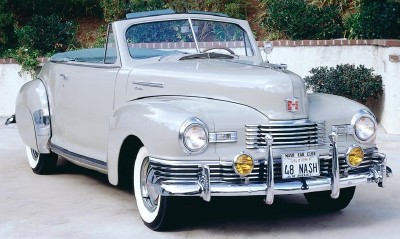 Despite severe postwar materials shortages, Nash returned to civilian operations earlier than most automakers and built 6148 cars during late 1945. That was good for third in the calendar-year race, but amounted to only four months of production.

In June 1948, Nash president George Mason became board chairman, succeeding the venerable Charles Nash, who died that month at age 84. Nash was able to share in the 1946 cele­bration of the auto industry's Golden Jubilee, one of only a dozen pioneers still living at the time.

Mason was among the postwar era's most visionary industry executives, certainly the most prophetic outside the Big Three. Believing the independents would have to merge for survival against the Detroit giants, he soon began working to put Nash together with Hudson and hoped to combine with Studebaker and Packard as well. More immediately, he pre­sided over the develop­ment of a radical all-new Nash for the 1949 model year.

In the interim, Nash followed most other makes by fielding renovated 1942 models for 1946-48. Ambassador Eights were dropped, the 600's horsepower was boosted to 82, and the Ambassador Six was pushed to 112 bhp. Styling alterations were relatively minor, yet the cars managed to appear fresh enough. The 1946-47s had inboard parking lamps; the '47s gained a wider upper grille and raised-center hubcaps. For '48, Nash erased the side moldings below the beltline, a cheap change that inadvertently made for a higher, less-streamlined appearance.

The postwar 600 line comprised fastback and trunkback four-door sedans and a notchback Brougham two-door. The lineup was expanded for '48 with the addition of DeLuxe, Super, and Custom trim variations, Nash anticipating a major sales upsurge that year.

Ambassador Six offered the same choices save for DeLuxe-trim '48s. Unique to Ambassador was the Sedan Suburban, lavishly trimmed in wood like the contemporary Chrysler Town & Country and Ford/Mercury Sportsman. Extensive hand labor necessitated stiff prices ($1929-$2227), so Nash built only 272 Suburbans for '46, 595 for '47, and a mere 130 of the '48s (which came only with Super trim). But they played the same role as the nonwagon Ford and Chrysler woodies, attracting buyers to showrooms with the promise of something new.

Suburbans are now coveted collectibles, mainly because only 10-15 are thought to survive. Only slightly less rare was the Custom-trim cabriolet added to the 1948 Ambassador line. It was the first open Nash since the war, but only 1000 or so were built. (Nash also built a small number of trucks with sedan-type front ends beginning with the 1947 model year, but most were ­­exported.)

Meantime, Nash's independent rivals had restyled for 1947-48, as had Olds and Cadillac. Remaining Big Three makes targeted 1949 for their first all-new postwar models. But so had Nash, and it weighed in with a stunner: the radical Airflyte. Continued through '51, it looks rather strange now, yet in its day the Airflyte was one of the most-advanced cars on the road. It was unquestionably the boldest Nash ever.

The Airflyte was cooked up during World War II by engineers Ted Ulrich and Nash veteran Nils Erik Wahlberg. Ulrich had worked on the prewar "600" while at The Budd Company, and was hired by Wahlberg on the strength of its success. The way-out "bathtub" styling was the work of Holden "Bob" Koto, who, with partner Ted Pietsch in 1943, had shown Wahlberg a small scale model much like the eventual production Airflyte.

Wahl­berg must have liked it, for he'd already experimented with streamlined cars in wind-tunnel tests. The Airflyte was thus very slick aerodynamically, with only 113 pounds of drag at 60 mph versus up to 171 pounds for the ­similar-looking '49 Packard.

Maintaining Nash's two-series lineup, the '49 Airflyte came as a "600," still on a 112-inch wheelbase, and as a 121-inch Ambassador (with the extra wheelbase length again entirely ahead of the firewall). Each series listed two- and four-door sedans and Brougham club coupes, all bulbous fastbacks. Engines were unchanged from 1946-48.

Novelties abounded: one-piece curved windshield, "Uniscope" gauge cluster (in a pod atop the steering column), reclining front seatbacks that met the rear seat to form a bed (dealers sold pneumatic mattresses as accessories), dual inward-facing rear seats on Broughams (separated by a "card table" armrest) and, after '49, optional seatbelts. Form-a-bed seats, plus the acclaimed "Weather-Eye" system, made Airflytes the most habit­able long-distance cars in America.

With the postwar seller's market still strong, the Airflyte sold very well -- better than any big Nashes had before. Some 135,000 were built for '49, rocketing Nash into the industry's top ten. The 1950 total was over 160,000 -- a company record, and that didn't include Nash's new compact Rambler introduced that year.