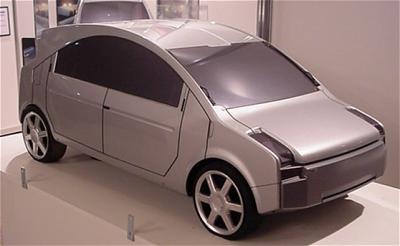 A table-top model of the low-mass concept vehicle, which could one day be marketed to developing countries.

As the major car manufacturers are showing off their best concept and production ideas, student designers have presented some intriguing designs of their own. One forward-thinking design has drawn the interest of car companies such as Ford and Toyota. Herain Patel, a design student at the Center for Creative Studies - College of Art and Design in Detroit, has proposed a low-mass vehicle.

The car would weigh about 30 percent less than current cars of comparable size, according to Carl Olsen, an instructor at the center. Because the car uses interchangeable parts, it would be cheaper to make. It will likely be marketed to developing parts of the world, such as India. A running prototype of the car could be developed in just a few years.