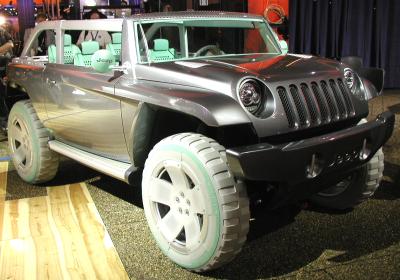 One of the most recognizable vehicles on the road since World War II has been the original Jeep Wrangler. At this week's auto show, Daimler Chrysler revealed a 21st century version of the Jeep. The Jeep Willys (pronounced Wil-eez) is named for the early Jeeps that were built by Willys-Overland.

Another striking feature of the Willys design is the light gray tires from Michelin, which compliment the color of the vehicle's body. Inside, the Willys concept has a satellite-radio receiver built into the pastel-green dash.

The Jeep Willys is powered by a 1.6 liter, in-line four-cylinder engine that produces 160 horsepower. It has a four-speed automatic transmission and a shift-on-the-fly transfer case with full-time four-wheel drive.