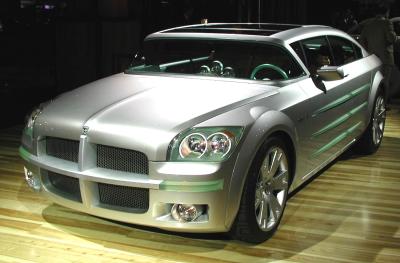 Daimler-Chrysler rolled out a new concept car, the aggressively-styled Dodge Super8 Hemi. This car makes passengers the priority, featuring the car-equivalent of stadium seating -- the back seats are higher than the front ones.

Like so many other concept cars we've seen at the show, this one has rear-opening rear doors and no b-pillar separating the front and rear doors. It has a very cool interior -- a retro look that incorporates ultra-modern technologies like wireless Internet access, and voice control of many car functions including audio, climate-control, phone and even e-mail!

The rear passengers also have their own LCD touch screens so they can watch movies or access the Internet. It has satellite radio, and can play MP3 music that you transfer from your home stereo to the car while it is parked in the driveway or garage.

The Super8 Hemi has three side moldings, which should give it extra protection against dings. And let's not forget about the engine, a prototype 5.7-liter, pushrod V-8 that should generate 353 horsepower. Like those found in the original Hemis, this engine has hemispherical combustion chambers.