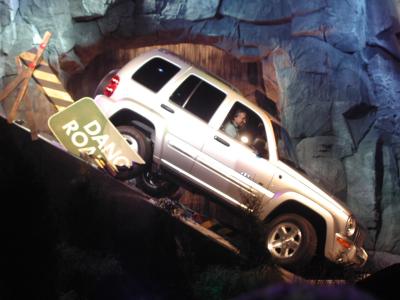 The Jeep Liberty makes a dramatic entrance, driving down a steep, rock-covered incline in front of a waterfall.

Daimler-Chrysler started their presentation with a fireside chat by "One Flew Over the Cuckoo's Nest" author Ken Kesey. Mr. Kesey reminisced about the days before interstates, quoting, among others, Robert Frost and famous road-tripper Charles Kuralt.

Daimler-Chrysler unveiled the 2002 Jeep Liberty SUV, which has some of the character of the original Jeeps, including good off-road capability, but with a refined on-road ride -- their idea of the perfect vehicle for taking the "road less traveled." Unlike Ford and GM, Daimler-Chrysler chose to unveil an actual production car, rather than a concept car.

One of Daimler-Chrysler's visions for this vehicle is that people will customize it, much like they have with the PT Cruiser.

The Renegade, a demonstration of how the Jeep Liberty can be customized.
The interior is simple, with stainless steel accents.