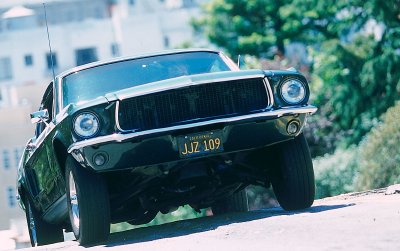 Mustang leapt onto the silver screen in a sensational San Francisco chase that had Bullitt's '68 GT catching air in pursuit of the bad guys' Dodge Charger. See more pictures of the Ford Mustang.

Its tire-smoking, engine-roaring duel is still the one by which all cinematic car chases are measured, and the 1968 Ford Mustang was at the heart of the action. Steve McQueen's dark green fastback, subtly tweaked to fit his personification of cool, is part of automotive lore and central to the Mustang myth.

The movie was Bullitt, released by Warner Brothers/Seven Arts on October 17, 1968. It's 113 minutes long, directed by Peter Yates from a screenplay by Alan Trustman and Harry Kleiner. The car chase was designed by Carey Loftin. The film starred Steve McQueen, Robert Vaughn, Jacqueline Bisset, and Don Gordon. Here is its story:

San Francisco police Lt. Frank Bullitt has lost a government witness to professional hit men, and he's dead set on getting his hands on the killers. The opportunity for professional redemption arises when he spies the bad guys' black 1968 Dodge Charger R/T 440 in slow-moving San Francisco traffic.

For three and a half minutes, Bullitt's Highland Green 1968 Ford Mustang GT 390 fastback tags behind the big Dodge. While paused at a light the Charger's driver fastens his lap belt with sober deliberateness. The light flips, the driver stands on the Dodge's accelerator, and two celebrated American muscle cars show what they're made of. The chase -- seven glorious minutes' worth -- is on.

Two identical Mustangs and two matching Chargers were used in the Bullitt chase sequence. So that the four-speed Mustang could run more easily with the brawnier four-speed 440 Magnum Charger, Hollywood engineer Max Balchowsky installed a racing cam on both Fords, milled the heads, and modified the ignition and carburetion systems. Additionally, Balchowsky bulked up the suspensions of all four cars for improved strength, handling, and control. One Mustang and one Charger were fitted with a full roll cage.

The chase was shot at normal film speed; there would be no cranked-up footage to jazz audiences. The byword was reality.

Steve McQueen played San Francisco police Lt. Frank Bullitt, a man on a mission to take down the hit men who killed a government witness.

Bullitt captures legendary star McQueen at the apex of his popularity and puts him in a milieu he loved in his private life: auto racing. He owned many fast cars and had particular fondness for his barely streetable XKSS Jaguar, which he liked to pilot at breakneck speeds along Sunset and serpentine Mulholland Drive high above Los Angeles. He participated in Sports Car Club of America events, and was an enthusiastic motorcyclist, as well.

McQueen insisted on driving the Mustang during the carefully choreographed pursuit, but when he failed to make a turn after locking up his wheels he sealed the deal for pro driver Bud Ekins, who handled the Mustang during the jouncy maneuvers along San Francisco's famously hilly streets. Stunt driver/actor Bill Hickman piloted the Charger.

Veteran stunt coordinator Carey Loftin designed the chase, plotting a course along a variety of city avenues and landmarks: Clay & Taylor streets, York Street, Potrero Hill, Kansas Street, Russian Hill, and the bucolic Guadalupe Canyon Parkway. Longtime SF residents will see that the chase is not linear, i.e., the cars jump freely around town from cut to cut. Well, chalk that up to artistic license.

The sounds emitted by the Mustang suggest a lot of double-clutching -- something that would not have been needed with a '68 Ford transmission. McQueen confirmed that the sweet racket of the car's engine and transmission were overdubbed recordings of a Ford GT40 driven at full tilt.

The highest compliment one can offer to Loftin and director Peter Yates is that the chase is completely believable. No "superhero" stunts, no impossible tricks -- just adrenaline-pumping speed, heightened by razor sharp cinematography (William Fraker) and Oscar-winning editing (Frank Keller), plus multiple points of view: drivers' eye, worm's eye, bird's eye, over the shoulder, close on McQueen and Hickman, and setups that suck us along inches behind the cars' back bumpers. Pat Houstis drove the camera car, which was built atop a Corvette chassis.

Dramatically, the chase works for a multitude of reasons, not least the human silence: neither Bullitt nor the hit men speak, not one syllable -- not when Bullitt's Mustang is momentarily blocked by oncoming traffic, not when the Charger nearly annihilates itself on a guardrail, not when assassin #2 (Paul Genge) loads his Winchester pump and pokes the barrel from the Charger's rear side window -- not even when Bullitt's windshield absorbs a blast of buckshot.

Instead, the soundtrack vibrates with the Charger's thrumming baritone and the hornet-like growl of the Mustang; the squeal of abused rubber; the deep, thudding thumps as the cars repeatedly bottom out on the city's hills; and the harsh reports of the Winchester. The mute concentration of the participants seems to underscore the chilly professionalism of Bullitt and the men he hunts. Deadly pursuit and flight, like rail-splitting or high-iron work, are masculine occupations best performed in silence.

The sequence did wonders for the Mustang mythos, of course, and didn't do Charger any harm, either. Ford offered a limited edition anniversary "Bullitt" Mustang for model-year 2001.

The chase altered the tone of cop films and upped the ante for writers and directors who felt obliged to attempt to surpass it. Some gems came later, notably in The French Connection and The Seven-Ups (both by Bill Hickman). Although the Bullitt chase is no longer the most kinetic in movie history, it almost certainly is still the best.