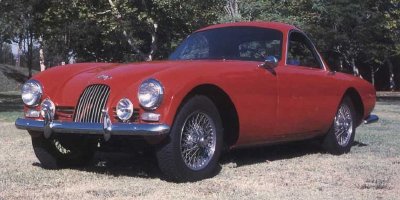 The lower-body lines of the Plus 4 Plus were conventional enough, but the bell-like roofline wasn’t. A spare was enclosed by a trunk with an external lid, three more items new to Morgan.

As Morgan carried on with its Thirties-style cars through the Forties and Fifties, customers kept buying and the press started complaining. The Morgan family -- particularly Peter Morgan, who'd become managing director at the end of the Fifties -- listened politely but resisted change. That is until 1963, when they suddenly unveiled a very different car, the Morgan Plus 4 Plus.

This was Malvern Link's first (and so far only) attempt at anything like modern styling, with a smooth "bubbletop" coupe body on an unaltered Plus 4 chassis. Its other novelty was that the body was made of fiberglass by an outside supplier instead of by Morgan using its traditional steel-over-wood construction.

Announcing the Plus 4 Plus was a laid-back grille of familiar Morgan design above a normal Plus 4 bumper. The windshield was curved and the roof fixed, both firsts for Morgan, as were glass door windows, which slid up and down via contact with the leading edge of the door frame. Seating remained strictly for two, but with a large cargo hold behind and a separate trunk with lid, two other Malvern Link "breakthroughs." The roof was almost bell-shaped and the lower body square-cut, with slab sides, large wheel cutouts, straight-through fenderlines, and a simple tail.

Triumph's 2.1-liter TR4 engine had recently been adopted for the Plus 4 roadsters, so the coupe had it, too, along with front disc brakes and, on most examples, center-lock wire wheels. Modern it may have looked, but the Plus 4 Plus had the same very hard ride, limited suspension travel, and jackhammer back axle as other Morgans. So primitive is this chassis, in fact, that experienced Morgan owners are said to be able to run over a coin on the road and tell whether it's up heads or tails.

Though smart-looking if no head-turner, the Plus 4 Plus was too radical for marque loyalists and too crude for non-Morgan owners. Malvern intended to build 50 but completed just 26 before abandoning this experiment in modernity after only three years.

To learn more about Morgan and other sports cars, see: