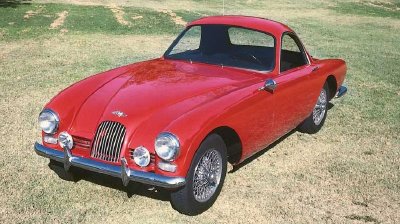 The strangely titled Morgan Plus 4 Plus deviated from Morgan’s classic style and alienated enthusiasts. See more pictures of sports cars.

The Morgan Motor Company got its start by building three-wheeled motor vehicles in 1910. By 1935 it had entered the four-wheel market, and 1950 saw its first sports car. In this article, you’ll find that, with a few exceptions, Morgan styling remained in the 1930s no matter what year a car was built.

The Morgan 4/4 Series II arrived in 1955, already looking like a throwback to a bygone era. Mechanicals would change, and performance would be upgraded over the years, but for more than three decades, the 4/4 (four wheels, four cylinders) would retain its distinct styling and hand-built, steel-over-wood-frame construction. Not quite as long-lived, the 1950 Morgan Plus 4 was a more-powerful, more-sporty iteration of the 4/4, though it too looked like it rolled straight out of the 1930s.

In the early 1960s, Morgan experimented with a more modern-looking car, with less than stellar results. The clumsily-named Morgan Plus 4 Plus deviated from many Morgan norms: It had a curved windshield, hardtop roof, fiberglass body, and hidden spare tire. In the end, its non-traditional styling managed to alienate Morgan enthusiasts and drive off would-be converts. Fortunately, Morgan got back on track with the Morgan Plus 8, and continues to blend modern performance with classic design.

Learn more about the history of this fascinating company, who to this day build each of their cars by hand. We'll get started on the next page with the classic Morgan Plus 4.

To learn more about Morgan and other sports cars, see: