Model U: A Chopper Profile 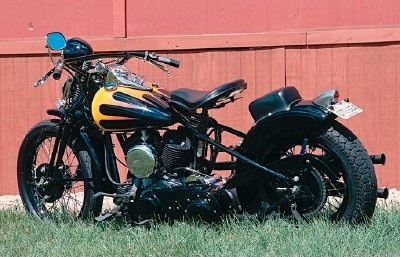 Unlike some Old School choppers, this Model U is really is old -- with a few exceptions.

A restored-to-stock 1941 Harley-Davidson flathead would be a valuable piece, but Robert Berry is a chopper guy. And he wanted to add a flathead to his stable to keep his chopped 1947 Harley Knucklehead company.

A 1941 Harley-Davidson Model U formed the basis for his flathead chopper. For the most part, the original hardware was retained: a low-compression 74-cubic-inch V-twin, four-speed transmission, hardtail frame, springer forks, and solo saddle with sprung seat post. While a modern hand-clutch/foot-shift arrangement replaces the original foot clutch/hand shift, stock Harley drum brakes are used front and rear, each supporting classic spoked rims.

From there, customization followed a Bobber theme. The fuel tank was modified to hold gas in the left half, oil in the right, thus eliminating the separate oil tank beneath the seat. The front fender is a mere sliver of its former self, and the trimmed rear fender hosts a 1950s-era custom taillight.

Only the TT-style exhaust with its tapered-cone mufflers and the artful scalloped paint treatment give this away as a modern machine -- because old-time Bobbers never looked this good.

Go to the next page for more photos and details of this Harley-Davidson-powered chopper, the Model U.For more information on custom choppers and motorcycles, see: 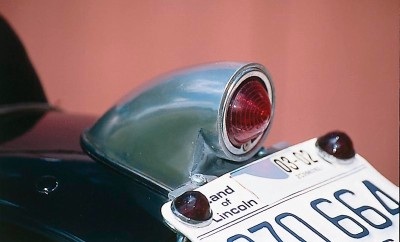 A “baloney” taillight is a 1950s styling element that still looks good today.

The Model U is a custom Harley-Davidson motorcycle built by Robert Berry. Below are more pictures and details of this powerful chopper.

The replica horn carries a personalized touch.
Harley’s classic tank-mounted instrument panel originated in the 1930s. The basic design is still used today, but many feel the old ones were more stylish.
The Model U is a celebration of new and old.