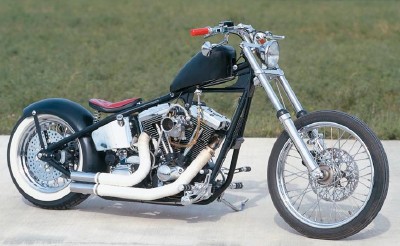 Not wanting to miss out on the chopper craze, Michael Agan decided to build his own. Operating under the name of Lifted Leg Customs, he began collecting the required components for his Model P chopper.

A Kraft Tech hardtail frame was chosen as the starting point, as it provided a classic chopper profile without going to extremes. A set of Harley-Davidson Wide Glide forks was added, along with spoke wheels that carried stock Harley disc brakes.

Power comes from an 80-cubic-inch Harley Evo V-twin that has been hopped up with an Andrews cam and S&S carburetor. Exhaust pipes are Sampson Sawed-Off Shorties.

A spring-mounted saddle adds a bit of comfort, and both it and the handgrips are done in a bright red that contrasts nicely with the matte-black finish. A rear whitewall tire brings another touch of retro to the ride, which took the novice builder just three months to complete.

Go to the next page for more details and pictures of the Harley-Davidson-powered Model P chopper.