It's a MINI World After All 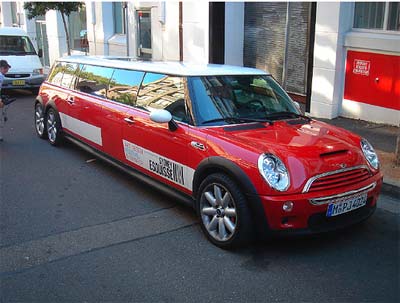 The MINI Cooper has inspired a diverse population of enthusiasts, from Hollywood wheelers and dealers to middle-class college students. Across the world you'll find numerous clubs and organizations for MINI Cooper owners. Just about every region of the United States has its own MINI club. A good resource to locate one near you is North American Motoring, an online community that hosts MINI news, discussions and articles.

Every year there are several events and meets where owners can socialize, show off their beloved vehicles, look at outlandishly modified MINI Coopers, exchange tips for tuning cars and even race their supercharged MINI Coopers. A few of the larger events include:

The MINI Cooper appears in several films. You may have watched a MINI Cooper speed through a subway system in "The Italian Job," or watched as Austin Powers' dad tooled around in a MINI with a unique Union Jack paint job. The unique look of the MINI seems to appeal to filmmakers.

When the MINI Cooper isn't tearing around corners on the silver screen, it's joining celebrities' fleets of cars. Ever since the days of the original Mini line, celebrities have embraced this quirky car. Some famous MINI (and Mini) drivers include:

In the next section, we'll look at MINI Cooper advertising and awards it has received.

A Remake for a Remake

In 1969, Peter Collinson directed a British heist film called "The Italian Job." The movie featured Michael Caine as the star, but some argue the real celebrities in the film were the red, white and blue Minis used as getaway vehicles. The cars burned rubber in multiple stunts and chase sequences. In 2003, F. Gary Gray directed the remake of "The Italian Job." When the time came to select the getaway vehicles for the new film, Gray chose the new 2003 MINI Cooper from BMW as a tribute to the original movie. Both films helped boost Cooper popularity.