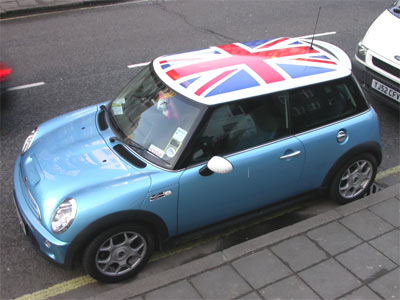 BMW introduced two MINI Cooper car models to the American market in 2002: the MINI Cooper and the MINI Cooper S. Both two-door hatchbacks were inspired by the classic Mini cars made in England from 1959 to 1999. Both were 18 inches shorter and 400 pounds lighter than the new Volkswagen Beetles (though they were 4 inches wider). BMW offered several choices in body colors, with an optional alternative roof color (the same color as the rest of the body, white or black -- a white roof was the standard for the old Mini line). Both models also featured the center-mounted speedometer, carried over from the original Mini model.

The MINI Cooper was 142.8 inches long, 75.8 inches wide and 55 inches tall, with a wheelbase of 97.1 inches. The car could seat four people and the rear seats could fold down independently for more storage space. It had antilock four-wheel disc brakes, six air bags, a tire pressure monitor and keyless entry. The Cooper also featured a sports suspension, which pressed the wheels to the ground to increase the tires' grip on the road.

The MINI Cooper followed its predecessor's philosophy of remaining relatively unchanged from one year to the next. In 2003, BMW offered new optional packages with both the MINI Cooper and MINI Cooper S models. A Sports Package included options like the antiskid system and increased the wheel size of the model (up to 17 inches for the Cooper S or 16 inches for the Cooper). Dealers could offer different roof graphics to customize cars -- graphics included the Union Jack, the American flag or a checkered pattern. BMW upgraded the CD player to include a port for an MP3 player.

In late 2003, John Cooper Works offered a tuning kit for the MINI Cooper S. This kit could boost the engine to an impressive 200 horsepower. The kit included:

The MINI Cooper of 2004 featured few changes from earlier models. Some drivers reported that the signature center-mounted speedometer was difficult to read without taking their attention off the road, so BMW added a digital speed readout under the tachometer. A rear power socket located in the trunk of the car returned in 2004 (the 2002 model had one as well, but the 2003 model discontinued the feature) as part of the standard MINI equipment. An optional Sport seat with larger side bolsters designed to hold drivers in place while taking tight turns at high speed became available in beige leather.

The 2006 MINI Cooper was virtually identical to earlier models. One new option was a Checkmate Package, which included the antiskid system, larger wheels, Sport seats and a black-and-white graphics overlay.

We'll look at the next generation of MINI Coopers next.