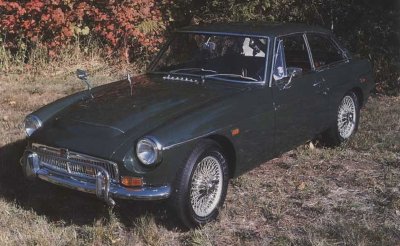 The MGC, shown here in fastback GT form, was outwardly little different from the four-cylinder B. U.S. versions wore side marker lights and other required equipment.

The MGC and GT had a short run, as they were the last to arrive at Britain's 1960s sports car party and the first ones ushered out the door. By the mid-Sixties, British Motor Corporation had too many sports models for the number it was selling, and set about reorganizing the ranks.

The Austin-Healey Sprite had been cloned into an MG Midget twin at the start of the decade. Before long, the A-H 3000 was looking the odd man out at the Abingdon sports-car factory. This prompted a new project coded ADO51/ADO52 (ADO for Austin Drawing Office).

Its object was a successor for the “Big Healey,” which did not share body or chassis with any other BMC car. The plan was a six-cylinder derivative of the successful MGB to be sold in A-H (ADO51) and MG (ADO52) versions. But Donald Healey refused to have his name on a car he hadn’t had a hand in, so only the MG appeared.

Tagged MGC, it was cleverly designed to use as many components from the BMC bins as possible. Starting with the MGB monocoque, engineers installed a new front suspension with longitudinal torsion bars to accommodate a 2912-cc straight six. Though similar in size and output to the 3.0-liter Healey engine, this ohv unit was completely different: shorter, a little lighter, and allegedly more efficient.

BMC, then reorganizing its passenger cars as well, had devised it for transverse installation in the new front-drive Austin 3-Litre sedan, revealed along with the MGC, which used a tuned version. Still, this was a fairly long power unit and thus a tight fit in the B’s engine bay, and it made the C quite nose-heavy. Predictably, the C got the new all-synchromesh gearbox, heavy-duty Salisbury rear axle, and new automatic transmission option developed for the Mark II MGB, also released at this time.

The 2912-cc straight six was a tight fit in the MGC's engine bay.

Outside, there was little to distinguish the C from the then five-year-old B. Even their badges looked alike. The newcomer’s most obvious differences were 15-inch wheels (versus 14s) and hood bulges to clear the bulkier six-cylinder engine. Like the B, the C was offered as a roadster and GT hatchback coupe.

The MGC got off to a bad start with the British press, which judged its handling inferior to the big Healey’s, its steering too heavy, and its general feel sluggish. It had, wrote one, lost “the Abingdon touch.” Sales were also sluggish as BMC merged with Leyland Motors to form British Leyland, then picked up to about the same rate as that of the last Healeys. But the MGC never quite recovered from the press drubbing and disappeared after just two years.

Initially, final-drive gearing was perhaps too tall and the gearbox ratios on non-overdrive models weren’t as sporting as they might have been. But BMC changed this on the ‘69s, which felt livelier but weren’t actually faster. (One problem: a conspicuous lack of torque.) At the same time, reclining seats were standardized and pretty “Rostyle” wheels became an option to plain disc rims.

But the public never seemed to accept the C after its 1968 “character assassination.” The last one was completed in September 1969, just 26 months after quantity production had begun. Of the 8999 built, about half (4256) were sold in the U.S.