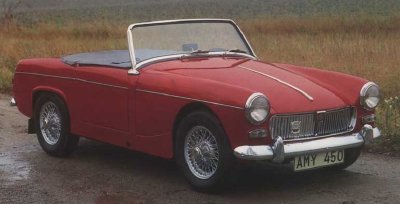 MG revived the Midget name on the rebodied 1961 Austin-Healey Sprite, though the Midget stood apart by dint of its vertical-bar MG-style grille, retained as shown here through 1969. See more pictures of MG sports cars.

The MG Midget had a heritage within the British automaker. MG’s first Midget was the 1928 M-Type. The name disappeared after the last K3 model of 1934, but the T-Series were Midgets in spirit. By 1958, MG was under the British Motor Corporation roof with Austin-Healey and producing the original A-H Sprite at its Abingdon factory. The “bugeye” proved so successful, especially in the U.S., that BMC decided to restyle it for 1961 and sell it in a second version as a new Midget.

Through 1971, the Sprite and Midget were built side-by-side as fraternal twins differing only in badges, grilles, and minor trim and equipment. The Midget then carried on alone through 1979. Basic design stayed the same throughout these 19 years, though there were running changes to engines, transmissions, brakes, suspension, top mechanisms, trim, and equipment. Of course, what applies to the Midgets also goes for the Sprites (badged simply as Austin Sprite in 1971 only).

Visually, the rebodied ‘61 Sprite/Midget was boxier and more conventional than the “bugeye,” its lift-up nose section replaced by fixed front fenders with integral headlamps, plus a rear-hinged hood. The tail was also squared up and given a conventional trunklid.

With all this, the new-design Sprite/Midget was much like its predecessor: a cheeky, high-revving little roadster that handled like a go-kart, wasn’t very fast, and had just enough room for two adults. Nevertheless, sales picked up in a big way, reaching 15,000-20,000 a year. This rate would be maintained (with many ups and downs) through 1979, with the U.S. taking the bulk of production as usual.

The cockpit on the MG Midget was spartan but serviceable.

Model changes began with the ‘63s, which received the larger 1098-cc version of the BMC A-Series four and 56 horsepower. A Mark III Sprite and Mark II Midget arrived in the spring of ‘64 with 59 bhp, taller windshield, wind-up door windows, and conventional semi-elliptic rear leaf springs. Fall 1966 brought the Sprite Mk IV and Midget Mk III with a more rugged, 65-bhp 1275-cc A-Series, followed in 1969 by minor styling changes arranged to eliminate virtually all remaining differences between the two versions.

With the Sprite retired after 1971, the Midget progressed to Mark IV form in 1974, identified by fully radiused rear wheelarches, plus a larger fuel tank and collapsible steering column, the latter prompted by U.S. regulations. Smog standards had stolen a lot of American engine power, so the Midget became a 1500 for 1975 via a drivetrain donation from the latest Triumph Spitfire. Flat-top rear wheelarches returned along with a jacked-up suspension to get the headlights up to U.S. regulation height, and a protruding black bumper/grille to satisfy new American impact standards.

The latter two followed MGB changes and reflected the apparent unwillingness -- or inability -- of troubled British Leyland to do more than meet the letter of U.S. law in the cheapest, most expedient ways possible. Thus, the Midget acquired a third wiper beginning with the ‘76 models to comply with another new visibility standard.

As the production figures show, these dreary changes plus steadily falling horsepower took a sales toll after 1974, though the Midget remained quite popular right to the end -- and likely profitable, what with tooling costs written off by the mid-Sixties. But BL was in desperate straits by 1979 and willing to do anything to increase its survival chances, even abandon sports cars. Thus, the last Midgets came off the line that autumn. A year later, MG’s historic Abingdon works would close forever.