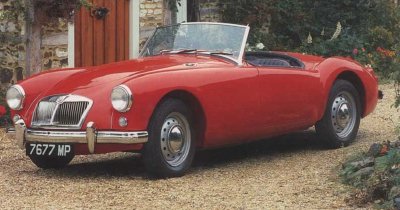 A completely new model for MG, the MGA maintained a clean basic appearance throughout its life.

The MGA and MGA Deluxe brought MG into a new era. The T-Series never sold better than in 1952, but MG was already thinking about a replacement. A prototype was completed that year, only to be mothballed by managers refusing to allocate production funds. In a couple of years, though, the T-Series had reached the end of the sales road, so its erstwhile successor was hauled out of mothballs. The result was the very different MGA of 1955.

It was virtually all-new, starting with the chassis: a modern, massively strong affair with the basic TD/TF independent front suspension and all-drum brakes. Wheelbase was unchanged, but more space-efficient chassis packaging and a smooth new envelope body provided more cockpit and luggage room than any T-Series ever knew.

While the 1952 prototype carried TD running gear, MG had become part of British Motor Corporation by the time the project was revived in 1954, so the MGA was reconfigured around newly developed “corporate” hardware as fitted to MG’s latest ZA Magnette sports sedan. It thus became the first MG sports car to employ the BMC “B-Series” four-cylinder engine, its associated 4-speed gearbox, and a new type of hypoid-bevel rear axle. The powerplant initially chosen was the 1489-cc version with a rated 72 horsepower, just enough for a top speed around the magic “ton” (100 mph).

In appearance and body construction there was no comparison with the old T-Series. The MGA’s fully welded all-steel body had the same long-hood/short-deck proportions, but was lower and wider and looked at least 20 years newer. Instruments reverted from octagonal to circular, while the dash provided for fresh-air ventilation and radio installation. Separately adjustable seats returned to MG for the first time in years, and turn indicators were standard.

Body styles were initially confined to the traditional roadster, but a fixed-roof “bubbletop” coupe arrived within a year, boasting roll-up door glass and exterior door handles (both lacking on the roadster) plus a curvier windshield.

Fast, safe, and well balanced, the MGA was such an advance on even the TF-1500 that it could have come from another make. Though not quite as fast as the rival Triumph TR3 (see entry), it was prettier to most eyes and sold far better than any T-Series. In fact, just over 100,000 MGAs of all types would be built through 1962.

Along the way, the MGA was treated to gradual but perceptible improvements in displacement, power, and equipment. The introductory model (retrospectively known as 1500) was replaced in 1959 by the MGA 1600, with 1588 cc, 80 bhp, and standard front disc brakes. Mid-1961 brought the 1600 Mark II, with 1622 cc and 86 bhp, plus a revised grille that made the car look as if it had been “kicked in the teeth.”

The hot Twin Cam variant had come and gone by then, but its suspension, all-disc brakes, and center-lock wire wheels were fitted to pushrod-engine 1600s and Mk IIs to create new DeLuxe variants beginning in late 1960. Except for superior braking power, they performed exactly as “non-DeLuxe” models. Most were loaded with extras rarely ordered on MGAs, and were pretty rare themselves.

Because weight seemed to rise in step with horsepower, late MGAs weren’t much faster than early ones (Twin Cam apart, that is) but all these cars were well loved by their owners -- and still are, come to that. The production figures tell the story; sales were truly excellent by European standards.

But it was time to move on again by 1962, the year that brought a new MG sports car destined to be even more popular and long-lived. Sadly, it would also be the last.