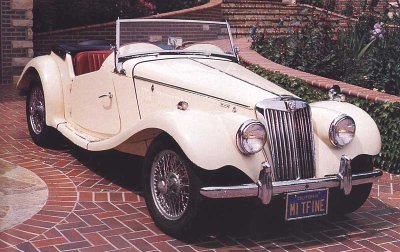 MG needed a new sports car to fight the likes of the Austin-Healey and Triumph TR2, but its owners forced it to update the aged TD.

What does an MG TF-1500 have in common with a ’57 Chevy? Not much, you may say. One was a small, stark, British Traditional roadster, the other a big, flashy period Detroiter with creature comforts galore and a plethora of body styles.

But consider: Both were basically extensions of existing cars given more power and updated styling to fend off all-new rivals. More significantly, each was the last and arguably the best of a kind. No surprise, then, that both have become the most coveted of their breeds, in part because each ended an era and not everyone liked what followed.

The TF succeeded the TD (MG skipped “TE” for sounding like “tee hee”) and was essentially a streamlined version of it. With fared headlamps, downsloped hood, raked grille, and lean-forward tail, it looked like what MG might have sold had not World War II intervened.

But the TF didn’t appear until late 1953, by which time the T-Series was way outclassed by new-design sports cars of similar price -- mainly the thoroughly modern Triumph TR2. Though MG coaxed 3-hp more, or 57 total, from its veteran 1250cc engine, the TF was no match for the 90-hp TR and was little faster than a TD, despite its smoother styling.

The MG TF had an old-world flavor that didn’t sell and old-school mechanicals that didn’t perform, though the 1500 is now the most sought-after of the T series.

Then again, it was only a stopgap. MG had actually designed the T-Series’ eventual successor by 1952, when it became part of the big new British Motor Corporation. But BMC was soon occupied with another new sports car, the Austin-Healey, so the future MGA was temporarily shelved and the TF was left to meet critical press reviews and slow sales (6200 built). MG responded by installing a 1466cc engine with 10 percent more power and 17 percent more torque to create the MG TF-1500 of 1954. Though quicker than the 1250 TF by 2.5 seconds to 60-mph and 5-mph all out, the 85-mph 1500 still was no threat to the 105-mph Triumph.

No matter. This turned out to be a one-year holding action of no great consequence -- at the time. It’s a different story now, as MG TF-1500s command top price among postwar Ts, equal to and sometimes above those of the classic TC. Which only proves that the last can be first in enthusiast affections, particularly when it’s scarce to begin with.