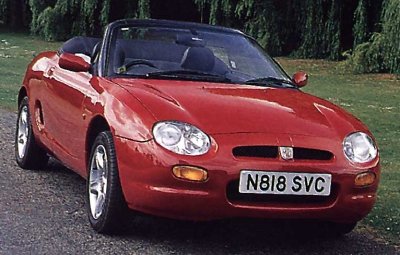 The MGF, an MG for the 1990s and beyond, has the same two-seat roadster spirit as its best predecessors.

Many cars claim to be “all-new,” but the MGF truly is. Aside from two seats, folding top, and the hallowed octagon badge, it owes nothing to past MGs. It’s a sports car of and for the ’90s -- and one of the best around. Given MG’s sad state in the ’80s, the F is both a welcome rebirth and an unexpected revolution.

It originated five years after the final B, when MG limped along with just a few sporty sedans based on humdrum Austins. But Austin Rover hadn’t abandoned “real” MGs, and hinted as much with the 1985 EX-E concept, a stylish mid-engine coupe. Four years later, a new sporting MG dubbed “Phoenix Revival” was underway at the successor Rover Group.

Though this program considered front- and rear-drive layouts, mid-engine/rear drive was finally chosen for reasons of handling and image, with Toyota’s then-new MR2 the benchmark for performance, packaging, and refinement. Design work was mostly finished by 1992, when Rover was bought by prosperous BMW, thus assuring the new model’s future.

The result was a smooth compact convertible with an exceptionally rigid unit-steel structure and MG’s first all-independent suspension. The latter was effective but not entirely new, being evolved from the novel “Hydragas” spring/damper system pioneered by the hapless mid-’70s Austin Allegro sedan. Sideways behind the cockpit sat an upsized version of Rover’s new K-series passenger-car engine, an advanced all-alloy four with twincams and 16 valves.

The MGF’s styling is chunky, but packages comfortable seating for two and generous cargo room.

Unique to the F was sophisticated variable valve timing that improved horsepower from 120 on the base model to 145 for the uplevel VVC edition, which also boasted a nifty new electric power steering system (optional on the base model).

With performance, comfort, and quality virtually unknown to MGs, the F met with instant wide acclaim. Predictably perhaps, Britain’s Car magazine picked the VVC over the new BMW Z3 and front-drive Alfa Spider in a May 1996 showdown: “The MG gleefully attacks bends, tires biting, engine sizzling...[It] not only does the job better than its rivals here, it has actually redefined the job. It does brilliantly what a sports car should do.”

Alas, the F won’t do anything in America, locked out by U.S. safety and emissions rules. Happily, Rover is already working on the next sporting MG, which will come Stateside and could be even better than the F.