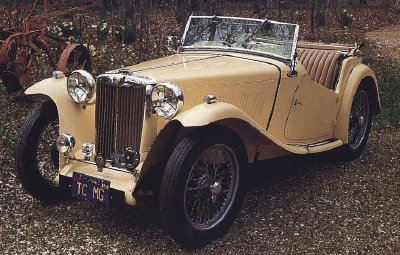 The MG TC seemed hardly the sort of thing to spark a revolution. It was already quite outmoded when announced in 1945 as one of Britain’s first postwar cars. It was only mildly evolved from MG’s prewar TA/TB roadsters, which themselves weren’t very different from the first Morris Garages car of 1923. But the TC, as later MG ads proclaimed, was “the sports car America loved first,” and things haven’t been the same since.

World War II GIs were the first Americans to discover the charms of sporting European cars, MGs included. And the TC was available factory fresh at war’s end, so a good many Yanks took one home, where they spread the gospel that getting there could be more than half the fun. Soon, sports cars began capturing America’s fancy -- if not many sales -- with the TC a symbol of the budding enthusiasm.

Still, these were very “foreign” cars to a people weaned on big engines, futuristic styling, and gee-whiz technology, and the TC was a frank anachronism with its flexible ladder-type chassis, crude solid-axle suspension, floor-shift gearbox and tiny (but tough) four-cylinder engine. Yet like Ford’s Model T, Americans loved this MG in spite of its faults, maybe even because of them.

As Road & Track founder John Bond wrote in 1956: “For a comfort-loving public [it] was wretchedly impractical; your spine was jolted, your knees bumped, you were hot in the sun and wet in the rain, you had no luggage space and only 54 hp --but for the first time in many a year you were driving a car. A person felt it was part of him, as quick and responsive to commands as a well trained mare, and for many a U.S. driver this was something new and wonderful.” And, of course, it looked terrific: classically “correct,” rakish yet elegant -- English decorum with wire wheels and cutaway doors.

The MG TC’s rakish looks and traditional-looking cockpit made up for its lack of horsepower for many drivers.

In retrospect, the TC was fortuitously timed for a postwar America with money to burn and time to spare. Who cared that performance was leisurely or that the skimpy top defied all operating logic? This was a car for sunny days and roads less traveled, one you drove for the sheer pleasure of it, not just to go somewhere. Old-fashioned it may have been, but the MG TC helped make driving a new American sport, and in the late 1940s, that was revolution indeed.