How the Mercedes SLR Works 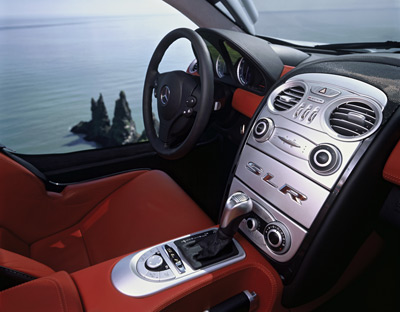 Many supercars skimp on creature comforts, and some of them don't even have interior carpeting. But Mercedes wanted the SLR to be something of a hybrid -- a powerful, fast car that's also comfortable for driving around town. So power seats, power windows, and power locks are included. Air-conditioning and a top-shelf seven-speaker Bose sound system add to the luxury, and there's also a navigation system.

The carbon fiber bucket seats are covered in "Silver Arrow" red leather. Six air bags protect driver and passenger alike from impacts in eight directions. Switches controlling the air brake and transmission are mounted on a console in the middle of the dashboard, while shifting thumb switches are located on the steering wheel. The car is started with a flip-top covered button on the shift lever.

Jay Leno (car collector and proud owner of an SLR) summed up the combination of performance and comfort features in a recent 4Car column: "One minute you can be tearing through the hills, hooligan stuff. The next minute you can take the wife in it, you can park it. I think the Mercedes-McLaren is the perfect compromise between road car and racer" [ref].

On the other hand, car purists might feel that the SLR's comfort diminishes speed and handling. After all, why build a 600-horsepower car and then weigh it down with power seats? Or, as Leno put it, "I have yet to play a CD in it; the SLR's entertaining enough without distractions" [ref].

Mercedes has set a retail price of $452,750 for the SLR, not including taxes. But even if you have the money, rarity could be an obstacle -- only 3,500 SLRs will be produced over the next seven years.

For more information on the Mercedes SLR and related topics, check out the links below.