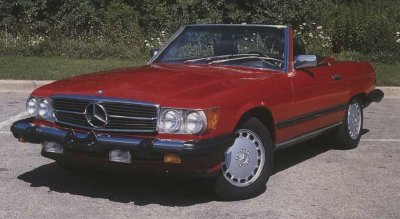 Strictly speaking, the R107 Mercedes SL isn’t a sports car but a two-seat GT. You may or may not consider that A Good Thing, but it’s precisely what Daimler-Benz intended.

D-B began contemplating a successor to the "pagoda-roof" W113 SL in the mid-60s. The firm was in an expansionist mood, seeking increased profits (though not necessarily more sales) especially in the lucrative U.S. market. Management realized that bigger, plusher, costlier cars were the way to go. Kicking off another design cycle for the entire Mercedes line, the replacement SL, internally coded R107, was the first model to embody this new philosophy, from which D-B has reaped vast rewards ever since.

Bigger and plusher the R107 certainly was, and very much designed with America in mind. Compared with the 230/250/280SL, it was longer overall (by 3.3 inches) and in wheelbase to provide a little more space behind the cockpit and room ahead for air conditioning, standard for the States.

It was also wider to accommodate Washington’s required door guard beams as well as bigger tires -- almost a necessity, as a switch from aluminum to steel body panels added some 300-400 pounds to curb weight. The extra beef undoubtedly contributed to passive safety, though several other features did more: a fuel tank tucked out of harm’s way over the rear axle, safety door handles and steering wheel, new-design seatbelts.

The R107 certainly looked heavier, with none of the previous SL’s lithe simplicity. A lift-off pagoda-style hardtop was retained (and even mimicked by a slight trunklid concavity) and there were functional features like ribbed taillamp lenses and A-pillar troughs that shed rain and muck to help the driver see and be seen. Overall, though, the styling was not readily accepted. One U.S. magazine initially described it as "Americanized" and "Anti-agile."

And this weightier Mercedes-Benz SL was less agile than its predecessors, though more civilized. Yet its chassis was quite capable, evolved from that of the late-60s "New Generation" compact sedans, with D-B’s typical rear swing axles (altered to function like semi-trailing arms) and excellent recirculating-ball power steering. To counteract the greater heft and enhance refinement, D-B specified its smooth 3.5-liter V-8 as standard for Europe.

American SLs got a 4.5-liter enlargement that emission controls rendered no more powerful. A clumsy four-headlamp treatment, instead of single flush-mount lights, also marred the U.S. version, as did protruding 5-mph "impact" bumpers, federally mandated from 1972-73.

The R107 SL was plusher inside, one of many aspects of the car designed with the American market in mind.

Though far removed from the original "Sports Light" concept, the R107 sold like no previous Mercedes-Benz SL, and has remained popular for a remarkable 16 years without major alteration. Not that Daimler-Benz has ever advocated change for its own sake but, with sales consistently strong, there’s been no need to monkey with this assured, polished, and solid sports tourer -- timeless in its open-air appeal and always decently quick, sometimes exhilarating.

Which brings us to the changes that have been made, mostly in engines. Let’s start with Europe, where a 2.8-liter twincam six-cylinder version was added in 1974 as an Energy Crisis special. This ran through 1985, when D-B substituted its new 3.0-liter sohc six (from the W124 sedans) for a new 300SL (though it was nothing like the hallowed Gullwing).

A hot 500SL appeared for 1980 -- just in time for "Energy Crisis II," though inflation had lifted all Mercedes into such rarefied price territory by then that sales were hardly affected by a mere fuel shortage.

Meanwhile, America got a smaller version of this all-aluminum 5.0-liter V-8 for a 1981-model 380SL, whose tame acceleration led to a "black market" demand for European 500s that frankly embarrassed Mercedes-Benz of North America. This plus an eventual oil glut persuaded D-B to develop a 5.6-liter replacement as a U.S. exclusive for ’86. Like the 500, it boasted improved anti-dive/anti-squat control, Bosch anti-lock brakes, and front chin spoiler (but no rear spoiler), plus driver’s airbag, limited-slip differential, and upgraded trim and equipment. In Europe, a 420SL replaced the 3.8-liter as the mid-range offering.

Today, the R107 is the senior citizen of the Mercedes line, and engines alone, no matter how good, aren’t enough against younger, higher-tech, more aerodynamic competitors. D-B is ready with a new R129SL, for 1989-90, and the R107 will be retired at last.

Many will be sad to see it go, but it will not be forgotten. Good Things never are.