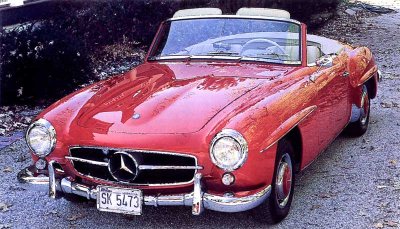 The Mercedes-Benz 190SL resembled the 300SL, but didn’t have gullwing doors or supercar performance.

The 1950s sports-car establishment never could come to terms with the Mercedes-Benz 190SL, an aristocratic European.

It had the proper sporting cues: dashing two-seat styling; all-independent coil-sprung suspension; floorshifted four-speed; even a slightly temperamental overhead-cam four-cylinder engine. But cars of this specification -- and this price -- were supposed to rip out to the road course on the weekend, go fender-to-fender with XK 120s, then terrorize the populace on the way home. Ferraris could. Porsches could. But this roadster from mighty Mercedes-Benz could not.

"It’s a dull-but-expensive piece of transportation in sports car clothing," wrote Jerry Titus in Sports Car Graphic. "While this opinion may infuriate some proud 190 owners, we doubt it will even raise an eyebrow at the factory, as we suspect this is exactly what they had in mind."

Precisely. Daimler-Benz had made a remarkable postwar recovery, rising from Stuttgart’s bombed rubble to resume auto and truck production and even to go racing in 1952 with the purpose-built 300SL. Road versions of that competition coupe reached showrooms about the same time as the Mercedes-Benz 190SL, which was styled inside and out to resemble the exotic 300, but was never intended to duplicate its performance.

Power from the tweaked sedan engine was merely adequate for the Mercedes-Benz 190SL.

Like most sports cars of the day, the 190SL was bred from a sedan platform. Its engine was tweaked with twin Solex carbs, but they were difficult to adjust and power was only adequate for the car’s weight. The suspension, tuned to fight the snap-oversteer tendency of M-B’s swing rear axles, delivered a compliant ride and relatively modest cornering.

There was a removable steel hardtop option, and eventually, a fixed-roof coupe. In all of them, passenger and luggage space were unusually generous for a two-seater, and workmanship was of the highest order.

Judged as the sports tourer it was designed to be, the Mercedes-Benz 190SL delivered at least as much as it promised. In fact, said Motorsport in 1956, "Proper use of the gears will propel a 190SL faster than most pilots can safely drive, and they will survive thanks to an overall dynamically balanced design."

By 1963, Mercedes would offer only one two-seater, the "pagoda-roof" 230SL. It was more like the suave 190 than the fierce 300, settling any debate about the sports-car philosophy of this German giant.