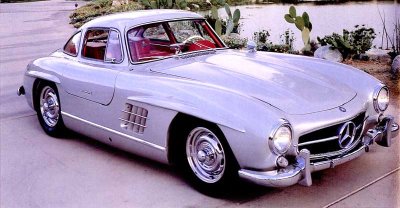 The great Mercedes-Benz 300SL was a LeMans-winner brought to the road. The high sills of its tube frame necessitated top-hinged doors for the celebrated “gullwing” effect.

The Mercedes-Benz 300SL once stood tall over its competitors. Over time, impressions of the classic Ferraris, Jaguars, Lamborghinis, and Porsches tend to swirl into a single golden sports-car memory, their pecking order indistinct. But step back into the mid-1950s, and it’s clear the Mercedes-Benz 300SL was in an orbit of its own.

"We can state unequivocally...the 300SL coupe is the ultimate in an all-round sports car," said Road & Track in April 1955. Gushed Walt Woron in the July 1956 Motor Trend, "If there’s a better production sports car in the world than the 300SL, show me the way to it!" Only Ferrari approached such accolades, but it couldn’t blend around-town gentility with open-road speed the way the 300SL could, and it certainly couldn’t match the Benz’s impeccable workmanship or even its unique design.

S for Super, L for Light, 300 for the engine’s 3.0 liters, the Mercedes-Benz 300SL was conceived not as a road car but as a 1952 sports-racer. It promptly took first and second in the Carrera Panamericana, the 24 Hours of LeMans, and the Nürburgring 1000 Kilometers. American import baron Max Hoffman convinced Mercedes to issue a production version, which it did in 1954.

The Mercedes-Benz 300SL's fuel-injected inline-six took 16 quarts of oil and produced a peerless blend of power and poise.

The inline-six was drawn from that of the big Mercedes 300 sedan, but was canted 50 degrees left to clear the 300SL’s hood. It was made of aluminum, used Bosch mechanical fuel injection, and had 220 hp -- 54 more than the LeMans-winning version. An optional cam brought 240.

This flexible six worked through an all-synchro four-speed and propelled the most-aerodynamic road car of its day to 140 mph with the 3.42:1 gearing, and to near 160 with the available 3.25:1. A coil suspension furnished a stable ride and spirited handling, but swing rear axles could prompt vicious oversteer.

In 1957, Mercedes replaced the Gullwing with the 300SL Roadster. Its modified space frame permitted conventional doors and its reworked rear suspension was friendlier at the limit; it was built through 1963. Time has softened the impact of the Gullwing, but to the sports-car enthusiast of the mid-1950s, nothing else could touch it.