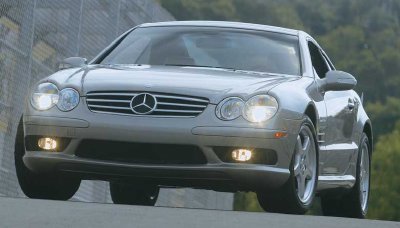 Mercedes-Benz managed to survive some early hardships to become one of the most recognized producers of luxury cars. See more pictures of Mercedes-Benz Sports Cars.

Mercedes-Benz is now a household name, but it wasn’t always smooth sailing for this automaker. In the years following World War II, Daimler-Benz’s first priority was to get their factories running again, producing the pre-war models they’d already developed. As you’ll learn in the following article, Daimler-Benz was back on its feet and innovating by the mid-1950s.

Their first postwar models were sports cars were the Mercedes-Benz 190SL and Mercedes-Benz 300SL, and -- like many other companies of the day -- Daimler-Benz made use of an existing model as the base for these machines. Both of these models were well-received, but while the 300SL was more powerful, the 190SL was more profitable. Eventually, though, they were both supplanted by the built-from-the-ground-up Mercedes-Benz 230SL (and later the 250SL and 280SL), which introduced the “pagoda” roofline and provided Daimler-Benz with an attractive, high-performance sports tourer.

The next step was the Mercedes-Benz “R107” family, named for the internal code used to designate the project. The line updated the Mercedes-Benz look and made many improvements under the hood, giving the cars more than 15 years of production.

There’s more to the story, of course, and you can learn about it in the following pages. Inside you’ll discover the history of Daimler-Benz through detailed car profiles and photos.