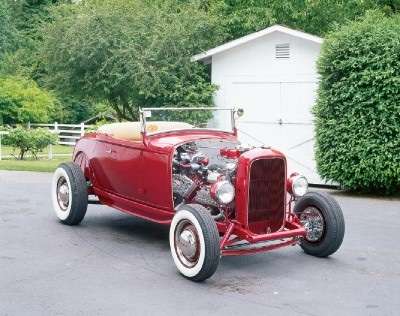 The McGowan Brothers' Roadster was built with body parts from a 1931 Model A roadster and a wrecked 1940 Ford coupe. See more hot rod pictures.

The McGowan Brothers' Roadster proves that even from the beginning, not all hot rods were built in California. Bobby and Frank McGowan were a pair of Branford, Connecticut, teen­agers in 1955, a time when old Fords were cheap and plentiful. Bobby and Frank paid $7.50 each for a bare-bones 1931 Model A roadster and another $7 for a wrecked 1940 Ford coupe.

Then they bought a 1932 Ford pickup from a local car club for another $20. As part of the deal, they had to give back the pickup body, which was fine with them because they only wanted the chassis. So, for $42, they acquired all of the chassis and body ingredients necessary to build a rod.

Local fabricator Charlie Hilde did the chassis work, which included Z'ing the 1932 rails and fabricating hairpin radius rods to replace the stock wishbones. Jack Crump, a body man from just up the road in Guilford, hammered the 1931 into first-class shape.

Bobby bought a new Ford flathead truck block and outfitted it with a set of Edmunds finned-aluminum heads, a dual-coil ignition, Fenton cast-iron headers, and a McCulloch supercharger for some substantial yet dependable horsepower.

The dash of the McGowan Brothers' Roadster was taken from the 1940 Ford. It was painted Buick Tahitian Red with the same tasteful pinstriping featured on the body.

The 1940 Ford donor supplied the transmission, rear end, brakes, and dash. The dual master cylinders came from a 1954 Ford.

The brothers raced their rod at the local dragstrip and showed it a few times, capturing the attention of the East Coast press. Despite the high profile, the car was mostly their daily ­driver.

The roadster stayed in the family for nearly 40 years before Bobby reluctantly sold it to collector Gordon Apker in 1995. Gordon had it professionally restored, insisting that authenticity be maintained.

The restoration turned out so beautifully that the McGowan Brothers' roadster was one of nine cars invited to represent the inaugural Historic Hot Rod Class at the prestigious Pebble Beach Concours d'Elegance in 1997.