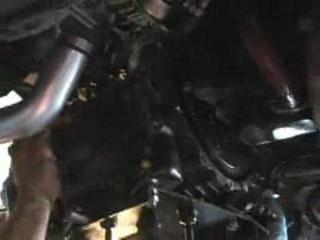 When you shift gears in your manual-transmission car, you move a rod that moves a fork that engages the gear. Depending which gear you're shifting to, a different fork does the job. The fork moves the collar to the desired gear, and dog teeth on the collar mesh up with holes on the gear in order to engage it. You engage reverse gear through a separate, small idler gear. The reverse gear always turns in the opposite direction of the other (forward) gears.

Modern cars use synchronizers in order to avoid the need for double-clutching. A synchronizer, or "synchro," lets the collar and gear synchronize their speeds while they're already in contact but before the dog teeth engage. Each manufacturer's synchro is slightly different than the others, but the basic idea is the same. For instance, a cone on one gear will fit into a cone-shaped depression on the collar. The gear and collar synchronize their speeds thanks to the friction between the cone and collar. Then the outer part of the collar moves out of the way so that the gear can be engaged by the dog teeth.