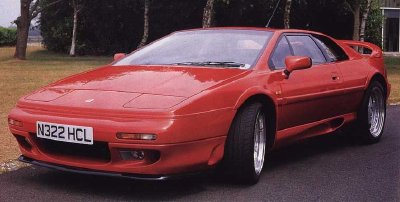 The Lotus Esprit is a mid-engine exotic that dates from 1975. Lotus has refined and fortified the Esprit over the decades.

Some cars get better with age. Take the Lotus Esprit. The 1996 V-8 model isn’t just the newest sports car from “Britain’s Porsche,” it’s the ultimate version of a contemporary classic, a car that’s seen Lotus through good times and bad.

Entering production in 1975, the Esprit was the second roadgoing mid-engine Lotus, after the 1967-vintage Europa. In addition to the established marque hallmarks of two-seat fiberglass bodywork, steel backbone chassis, and race-proved independent suspension, the Esprit had trendy “doorstop” styling by Italy’s Giorgetto Giugiaro and Lotus’s new 2.0-liter twincam four. It was mounted longitudinally and delivered 160 hp (140 in U.S. tune) through a five-speed transaxle for 0-60 mph in nine seconds or less.

The 1982 death of founder Colin Chapman began a troubled era for Lotus, but the Esprit hung on as sister models died. The first major improvements came with 1980’s “S2.2,” named for its enlarged 2.2-liter engine. More exciting was a 150-mph Turbo Esprit with 210 hp, a stiffer chassis, larger wheels and brakes, and revised suspension that also benefitted 1981’s non-turbo Series 3. SE models debuted in 1987 with 228 hp in the Turbo, then 264 from ’89, and a smooth-contour restyle by Britisher Peter Stevens. The replacement S4s of ’93 were the most luxurious Esprits ever and sired the strongest of the four-cylinder breed, the turbo Sport 300 and similar S4S, both with 300 hp and sub-five-second 0-60 ability.

Despite such performance, turbo Esprits were always high-strung mounts demanding an expert driver (preferably of jockey build) and a rich man’s means. Today, thanks to Lotus’s new 350-hp aluminum twin-cam twin-turbo V-8, the Esprit fulfills Chapman’s original vision of a smooth, refined, mid-engine supercar -- though it’s only about as quick as an S45. Still, wrote Paul Frere for Road & Track, it “puts you in charge of a wonderful engine, performance in the Porsche Turbo class, superb handling and a surprisingly good ride.” What’s more, 20 years of careful honing finally produced a Lotus “that is beautifully made, down to the smallest details.”

To learn more about Lotus and other sports cars, see: