Lincoln Quality During the 1960s 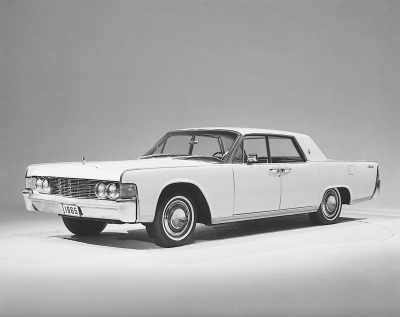 Styling aside, Lincolns were renowned for quality. This was mostly due to the efforts of Harold C. MacDonald, then chief engineer of Ford's Car and Truck Group. The '61s had the most-rigid unit body/chassis ever produced, the best sound insulation and shock damping in series production, and extremely close machining tolerances. The model year also brought an unprecedented number of long-life components, including a completely sealed electrical system, and superior rust and corrosion protection.

The 1961 Lincolns were also among the most thoroughly ­tested cars in Detroit history. Each engine -- still a 430-cid V-8, though detuned to 300 bhp -- was run three hours on a dynamometer at 3500 rpm (equal to about 98 mph), torn down for inspection, then reassembled. Automatic transmissions were tested for 30 minutes before installation. Each car was given a final 12-mile road test and checked for nearly 200 individual items, after which an ultraviolet light was used to visualize a fluorescent dye in lubricants as a check for leaks. Backing these measures was an unprecedented (for 1961) two-year, 24,000-mile warranty.

Response to the '61s was immediate and satisfying. Sales exceeded 25,000, and Lincoln surged ahead of Imperial for keeps. Styling changes for the second and third year were minimal, Lincoln having promised to concentrate on functional improvements, at least for a while. The '62s had a tidier grille with narrowed central crossbar and head-lamps no longer recessed; the '63s gained a finely checked grille, matching backpanel appliqué, and increased trunk space, plus engine tuning that yielded an extra 20 bhp.

Wheelbase grew to 126 inches for 1964, where it would stay through '69. But the essential look was unchanged. The main alterations, aside from the aforementioned flat door glass, were a slightly convex vertical-bar grille, broader rear window, and a lower-profile convertible top. The '65s received a horizontal grille motif, parking/turn-signal lights in the front fenders, and ribbed taillamps.

A body change for 1966 restored a two-door hardtop model as Lincoln sought higher volume, the convertible having accounted for only 10 percent of sales. Body lines became less rectilinear as a slightly larger fender "hop-up" appeared just ahead of larger rear-wheel cutouts. An extended front added some five inches to overall length, the grille acquired fine horizontal bars and a bulged center section (carried through in the sheetmetal above), and the front bumper wrapped all the way back to the front wheel openings. The V-8 was bored and stroked to 462 cid and 340 bhp.

All this plus lower prices -- as little as $5485 for the hardtop coupe -- pushed 1966 Lincoln sales to nearly 55,000 units, though that was still only 25 percent of Cadillac's model-year volume. A segmented grille, shuffled emblems and taillamps, and a spring-loaded hood emblem appeared for '67, when the convertible sedan took a final bow with only 2276 copies sold. Overall production remained strong, however, at over 45,500 for the model year.