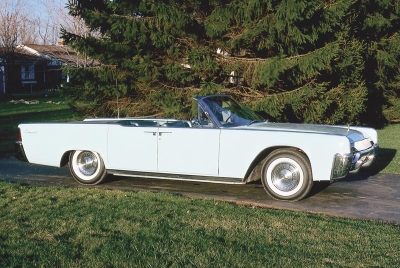 The 1961 Lincoln Continental convertible was downsized and more successful than the behemoths of the recent past.

Lincolns and the companion Continentals were little-changed for '59. The Premiere convertible had transferred to the separate 1958 Continental Mark III line, leaving a four-door sedan and two- and four-door hardtops in Capri and Premiere trim. All returned for '59, when Continental was absorbed as a Lincoln subseries and Capris became simply Lincolns.

It bears mentioning that although the 1956-57 Mark II and 1958 Mark III were products of a separate Continental Division, and thus "non-Lincolns," all later Marks and Continentals are properly regarded as Lincolns. The reason is the collapse of Ford's grand scheme for a GM-like five-division structure following the '58 recession, and the particular failure of Edsel and the Mark II to sell as planned. The Continental marque was thus merged with Lincoln for the 1959 model year. In January of 1958, the Edsel and Mercury Divisions were combined into a short-lived M-E-L structure as a cost-cutting move. Ford's upper division then reverted to its original status as just plain Lincoln-Mercury, which continues to this day.

The '59 Mark IV was just a facelifted Mark III, but added a formal-roof Town Car and limousine priced about the same as the short-lived $10,000 Mark II. Likewise, '59 Lincolns were lightly touched-up '58s. Horsepower was reduced to 350 for all models in a faint sop to a now mileage-minded public. Though the division desperately held prices close to previous levels -- $4900-$5500 for Lincolns and Premieres, $6600-$7000 for standard Marks -- Imperial surged ahead in 1959 model-year volume -- and would win again the following year. Lincoln's '59 total was dismal at 15,780, plus 11,126 Mark IVs.

Lincoln and Continental styling was lightly touched up for 1960. Grilles gained new inserts, the massive front bumper guards moved inboard of the canted headlamps, and rear ends were reworked. Lincolns also sported a reshaped roofline and rear window, plus new full-length upper-body moldings. Horsepower dropped to 315. Prices stayed much the same, and standard equipment was as compre­hensive as ever, but Lincoln sales withered to just under 14,000, though Continental held steady at about 11,000.

A much happier chapter opened for 1961 with an all-new "downsized" Continental. Replacing all the old behemoths, it bowed in just two models: a thin-pillar four-door sedan and America's first four-door convertible since the abortive Frazer Manhattan model of a decade before. Both rode a 123-inch wheelbase, same as on the trim mid-'50s Lincolns, and featured a '30s throwback in rear-hinged "suicide" back doors. Prices were in the middle of what had been Mark V territory: an announced $6067 for the hardtop, $6713 for the convertible.

With its classic beauty and superb engineering, the '61 was arguably the most-satisfying Lincoln since the V-12 K-Series. It was certainly one of the '60s best Detroit cars. Enhancing both its image and sales was fortuitous timing, the '61 arriving just as a youthful new First Family was occupying the White House. The new Continentals were soon seen in newspaper and magazine photos as the new Administration's transport of choice, personal and official, which is why these cars have since become known in some circles as the "Kennedy Continentals."

Their chiseled good looks reflected the efforts of seven Ford stylists: Eugene Bordinat (corporate design chief), Don DeLaRossa, Elwood P. Engel, Gale L. Halderman, John Najjar, Robert M. Thomas, and George Walker. They were collectively honored with an award from the Industrial Design Institute -- unusual, as the IDI rarely bothers with cars. But the '61 Lincoln, it said, was an "outstanding contribution of simplicity and design elegance." Interestingly, the basic cowl structure was shared with Ford's new '61 Thunderbird, which halved tooling costs for two low-volume models, even though the 'Bird was very different aft of the cowl and rode a 113-inch wheelbase.

The '61 introduced a basic Lincoln look that would continue into the late 1980s. The original was naturally the purest: smooth, gently curved bodysides topped by straight-through fenderlines edged in bright metal; a modest grille with outboard horizontal quad headlamps; a simple tail (not unlike the Mark II's) with a panel repeating the grille texture and taillamps set in the trailing edges of the fenders. All corners were easily seen from behind the wheel, handy for parking. Side windows curved inward toward the top were a first for mass production, matched by a greenhouse with the greatest degree of "tumble-home" yet seen on a large American luxury car. Door glass would remain curved through '63, became flat for 1964-70, then be curved again. Unlike the old Frazer, the convertible sedan's window frames slid completely out of sight. So did its fabric top, stowing beneath the rear deck via 11 relays connecting mechanical and hydraulic linkages. (Much of this design stemmed from Ford engineering for the 1957-59 Skyliner "retrac" hardtops and 1958-60 Thunderbird convertibles.)