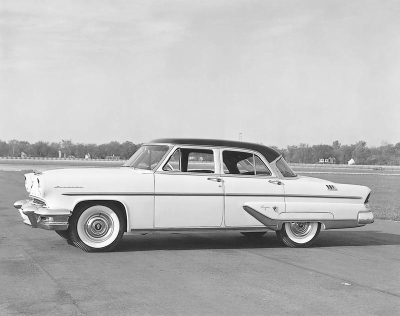 The 1955 Lincoln Capri featured a flat windshield despite the popularity of the wrapped windshield.

It was superior in many ways. Its crankshaft, for example, had eight counterweights versus most competitors' six. Intake valves were oversized for better breathing and higher specific output. (Among '53 engines, it produced 0.64 bhp per cubic inch against 0.63 for Cadillac and 0.54 for the Chrysler Hemi.) The crankcase extended below the crankshaft centerline to form an extremely stiff shaft support, hence this engine's family nickname of "Y-block."

Model-year 1952 also introduced ball-joint front suspension to Lincoln. Together with the new V-8, it made for taut, powerful road machines that would dominate their class in the Mexican Road Race. Other new features included recirculating-ball power steering, oversized drum brakes, liberal sound insulation, optional four-way power seat and, with the extra-cost factory air conditioning, flow-through ventilation (when the compressor was idle). Fabrics, leathers, and fit-and-finish were all top-notch, far above those of lesser Dearborn products.

Despite a rather short 123-inch wheelbase, the 1952-54 Lincolns were roomier inside than previous models -- and some later ones. Visibility was better than on any other contemporary U.S. car save Kaiser, and exteriors were notably free of period excesses. Fluted taillamps shed water and dirt, just like those Mercedes would adopt in the '70s.

Lincoln turned in some spectacular performances at the Carrera Panamericana -- virtually unrivaled in the Inter­national Standard Class. Lincolns took the first five places in 1952, the top four in '53, and first and second in 1954. Race preparation was largely owed to Clay Smith, a gifted mechanic who was tragically killed in a pit accident in 1954. Of great help were publicity-conscious Dearborn engineers who supplied stiff "export" suspension pieces, Ford truck camshafts, mechanical valve lifters, special front spindles and hubs, and rear-axle ratios that enabled a "stock" Lincoln to top 130 mph. The 1952 race winner, Chuck Stevenson, finished the 2000-mile grind from Juarez to the Guatemala border nearly an hour ahead of the Ferrari that had won the year before.

Lincoln wasn't ready with a total redesign for 1955, so its cars were among the most conservative in that banner Detroit sales year, despite an extensive facelift. Still, they were crisp, clean, and elegant. Though the wrapped windshield held sway most everywhere else, the '55 Lincolns didn't have one, and were thus more practical. Interiors remained luxurious combinations of high-quality fabrics and top-grain leather.

Wheelbase was unchanged for '55, but the restyle added extra sheetmetal (mostly in back) and 50-100 pounds in curb weight. A good thing, then, that the V-8 was bored to 341 cid and gained 20 bhp. Elsewhere, Cosmopolitan was retagged Custom, and Lincoln finally offered its own auto­matic transmission. Called Turbo Drive, it was basically the four-year-old Ford/Merc-0-Matic unit enlarged and strengthened to withstand the greater torque of Lincoln's V-8. But likely because its '55s weren't "new" enough, Lincoln was one of the few makes to suffer in Detroit's best sales season of the decade, dropping from nearly 37,000 for '54 to a bit over 27,000.