The Future of Lincoln 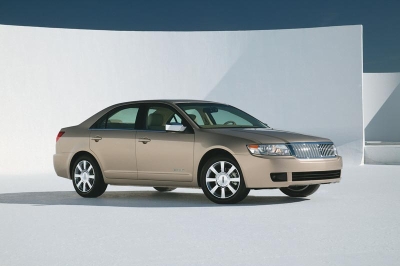 The 2006 Lincoln Zephyr, aimed at first-time luxury buyers, was Lincoln's smallest car ever.

It may not too late for Lincoln to transform its image and near-term prospects, as vital new products are now reaching showrooms or soon will be. Though all have Ford and/or Mercury counterparts, Lexus has succeeded handsomely with various tarted-up Toyotas, giving hope that Lincoln's newest can do likewise, salvaging Lincoln's future.

Two of them bowed for 2006. First up was the Mark LT, a "proper" luxury pickup based on the redesigned 2005 F-150 SuperCrew. The Lincolnized truck avoided the old Black­wood's foibles with a work-ready 5.5-foot-long cargo bed and available four-wheel drive with low-range gearing. A 300-bhp 5.4-liter V-8 and four-speed automatic transmission were familiar (also mandatory), but most everything else was inherited from the well-regarded new F-Series. Consumer Guide® thought Lincoln should have splurged for a more upscale interior, a unique engine, and safety features like curtain side airbags and antiskid system, the last available on the corporate shelf but not offered even as options. But Lincoln may correct those oversights in time, and fewer specific components allowed pricing the LT lower than the Black­wood: just under $39,000 with two-wheel drive, a bit over $42,000 with 4WD. One thing didn't change: Lincoln was still the only luxury brand to offer a full-size pickup -- a "difference to sell" that could yet pay off.

Also arriving for '06 was Lincoln's smallest car ever, a front-wheel-drive midsize sedan reviving the historic Zephyr name. The basic design was shared with that year's new Ford Fusion/Mercury Milan and owed much to Japanese partner Mazda, but the Zephyr had all the essentials of a modern near-luxury car, including antilock disc brakes, front and curtain side airbags, dual-zone climate control, and a reasonably roomy leather-upholstered cabin. Fusion/Milan charged extra for a 221-bhp 3.0-liter Duratec V-6 and six-speed automatic transmission, but both were standard for Zephyr.

So was a unique twin-cowl instrument panel recalling the dashboards of classic early '60s Continentals. Competitively priced at $29,000 to start, the Zephyr aimed at first-time luxury-class customers seeking a comfortable, well-appointed tourer, though it had sport sedan potential that Lincoln could exploit one day. Meanwhile, Lincoln focused on higher "brand recognition" by discarding model names for "MK" labels -- which is why the Zephyr was rebadged MKZ for 2007.

For the same reason, a totally different Aviator appeared for 2007 as the MKX. A sister to that year's new Ford Edge, it was Lincoln's first shot at the lucrative luxury "crossover" market exemplified by the popular Lexus RX wagon. Ford followed a similar formula, employing a car-type platform (designated CD3 and developed with Volvo) with front drive and optional all-wheel drive. The powertrain was fresh, too, comprising a 250-bhp 3.5-liter V-6 and a six-speed automatic transmission codeveloped with General Motors. Predictably, the main differences with Edge involved more standard features and available luxuries, plus a fine-checked grille reminiscent of '60s Lincolns. Though the MKX was just emerging as this book was prepared, it suggests that Dearborn is prepared to give Lincoln whatever it takes to ensure a successful future.

Part of that future rides with the so-called MKS, a new large sedan expected for 2008. It's the smaller of two such Lincoln models based on the corporate "D3" platform, another Volvo collaboration that premiered with the 2005 Ford Five Hundred/Mercury Montego. The apparent plan is to have this pair replace the LS and the venerable Town Car. The MKS was previewed in early 2006 with a "teaser" concept distinguished by crisp, tightly drawn styling and a 315-bhp 4.4-liter V-8 driving all four wheels through a six-speed automatic transmission. "What that concept does for us," declared one Dearborn exec, "is say, 'OK, we're not stopping. [Lincoln is] going to be back. That is very, very important."